This week’s Nintendo Download is a good one. No really, it is. Not only do we get Sonic Mania, but also a bunch of additional titles, and a really solid demo.

Finally, at long last, Sonic Mania is here for the Switch. It’s clearly the headline game this week, though Nintendo is promoting another release almost more than the Blue Blur’s latest. That game? Flip Wars.

No, I have no idea what it is either. It looks kinda neat though, and it’s got online play if you’re into that. So, yeah – Sonic!

In other Switch news, the console also gets the stylish Severed this week, and that demo I mentioned. This one is a game that you’l definitely know, it’s Rayman Legends Definitive Edition. Kind of snuck right up on you huh?

Not the full game, this is -again- a demo. What’s included isn’t revealed in the press release, though I assume it’ll be a nice little appetizer, before the main event when Legends hits on the 12th of next month. You know, usually I don’t get excited over re-releases, but I never played Legends, and quite frankly it looks gorgeous. Should be a solid addition to the Switch.

So all in all, a pretty great week for Nintendo. And yes, of course there’s a Neo Geo game too. 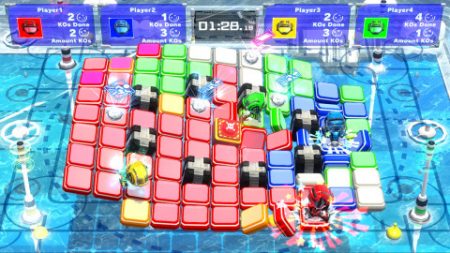 Jason's been knee deep in videogames since he was but a lad. Cutting his teeth on the pixely glory that was the Atari 2600, he's been hack'n'slashing and shoot'em'uping ever since. Mainly an FPS and action guy, Jason enjoys the occasional well crafted title from every genre.
@jason_tas
Previous Fallout 4 Game of the Year Edition drops this September
Next Etrian Odyssey V receives October release date, new trailer