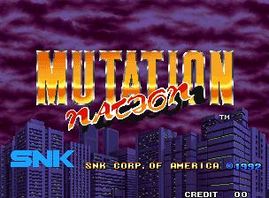 A lost title from the Neo Geo, Mutation Nation is a stunningly competent side-scrolling beat’em up.

How could it be bad with a title that rhymes?

I feel like there’s a song just waiting to be discovered in that title. Mutation Nation. Anyway, this is one that you might not have heard of, and if you haven’t… well don’t feel too bad. While there were a great many Neo Geo games that got ported into oblivion, more than a few didn’t.

Not that I am an authority on the platform, but I can’t recall seeing Ninja Commando or Nam-75 on any other platform. And Nam is arguably one of the console’s best known games. Right there with those two is Mutation Nation, a game about fighting, walking, and… mutation. Sort of.

Taking place in the year 20XX (where’s Mega Man?), MN focuses on a city where a mad scientist has mutated its inhabitants. They’re now horrible beast-people, and must be stopped. I guess. The story isn’t all that clear honestly, but what’d you expect? 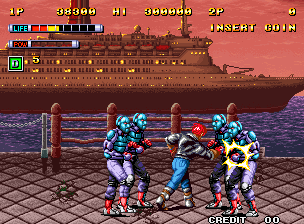 The bottom line is that the action takes place in a brawling fashion with 1 or 2 players. You battle across the scared metropolis, applying liberal amounts of your knuckles to mutants and some cool-looking robotic foes.

Actually one of the best parts of the game, the graphics on Mutation Nation are pretty sharp. The areas that you’ll play in are solid, with a nice dystopic look to them. They might not be the brightest, but there’s a lot of detail in there, and everything fits the theme.

Stages are also pretty varied. You’ll fight in the city sure, but also on moving vehicles. There honestly isn’t a huge difference to any of this, as none of it changes gameplay all that much, but it looks cool. So points for that.

The character art is pretty excellent though. The main playable character looks pretty generic, but the enemies have some really fun designs. Baddies range from normal looking humans to people with insect heads, and some that even morph into beetle creatures and charge you. Then there are the bots sprinkled throughout as well, just to mix things up visually.

As for gameplay, it’s familiar. Very familiar. Put it this way – if you’ve played Streets of Rage, you’ve played Mutation Nation. Actually, that’s kind of true for every brawler from the 16 bit era, when you think about it. So it’s not like it’s much of an oddity that MN is pretty samey with the likes of that series and Final Fight. 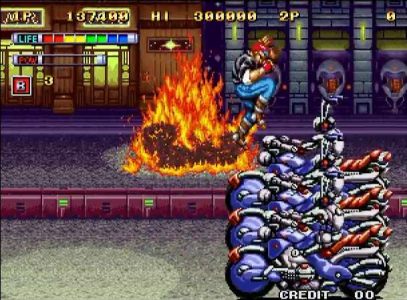 It’s really just the aesthetic that sets this particular one apart from the rest. Otherwise, you have your standard attack, jumping attack, and special attacks. There are pickups too that you can grab as you play, which give you additional specials.

So yes, it’s extremely familiar, but that doesn’t mean that it isn’t fun.

Jason's been knee deep in videogames since he was but a lad. Cutting his teeth on the pixely glory that was the Atari 2600, he's been hack'n'slashing and shoot'em'uping ever since. Mainly an FPS and action guy, Jason enjoys the occasional well crafted title from every genre.
@jason_tas
Previous Playing Catchup: Yakuza 0
Next Namco Museum hits Nintendo Switch at the end of this month, includes Pac-Man vs