Going to Comic Con in a few weeks? Then you’ll probably be interested in this Super Mario Bros exclusive from Entertainment Earth.

Now, technically this is just a repackaging of figurines that are already available. I think anyway. I’ve never personally seen an 8bit Princess Peach at retail or anywhere else, but I know that Mario here has seen shelves already. I’m fairly certain Peach has too. 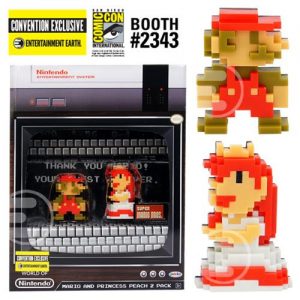 Still, and even if you have said figurines, it’s hard to deny the appeal of this little set. Not only are the two characters in question contained within, but the box is awesome. I mean, it’s set up to look like an old school CRT with an NES on top. How cool is that? And it’s even got the ending of Super Mario Bros as a stage for the figs. Too cool.

It’ll be at Entertainment Earth’s booth, number 2343 on the show floor. You can also order one online, though you’ll be taking your chances that way. EE says it’s only if there are units left after the Con. Better than nothing though, if you want one and can’t get to San Diego.

The whole thing will run you $14.99 USD and you can check it out here.

Jason's been knee deep in videogames since he was but a lad. Cutting his teeth on the pixely glory that was the Atari 2600, he's been hack'n'slashing and shoot'em'uping ever since. Mainly an FPS and action guy, Jason enjoys the occasional well crafted title from every genre.
@jason_tas
Previous Arms (Switch) Review
Next Episode 3: The S NES Classic and Gumby Returns