Welcome to the Deadside. One of many dimensions in the afterlife. A pit-stop, final cursed resting place, or source of something more sinister. What purpose it serves in Rapture is yet to be explained… 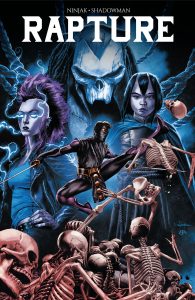 A place that no one wants to be. Final stop, or just a waystation on their descent into hell, everyone finds themselves here or someplace like it.

Tama ventures through the Deadside in search of a demon living atop a high tree. The demon is the only being that can provide the answers she seeks. To reach him, she must solve riddles and perform incredible climbing maneuvers. Being the clever girl that she is, she is able to perform the feats and solve the riddle with little effort. One slip of her footing brought some of the booby traps down on her and her companion, T.A.D.D.

We quickly learn that Tama, our 12 year old protagonist, is humanity’s last hope. Tama and T.A.D.D. are seeking the Book of the Geomancer, a book that is incredibly rare, and is constantly rewriting itself. The book, along with scrolls and other research Tama has done are leading her to the demon, which will be able to identify the location of a catastrophe.

Tama and T.A.D.D. finally reach the top of the tree and find the imprisoned demon, who prefers to go by Amy. Amy was overthrown and imprisoned by Azazel ages ago. After exchanging some pleasantries, Tama enquires about a clue from an ancient scroll. The scroll is written on the language of Babel, language of the heavens. We learn that Babel was not a place as many have always believed, but was a person. A vile and corrupt person.

Babel conjured builders that assaulted the heavens, caused the great flood, and could kill a man by merely uttering a word. Babel was banished from the Liveside to the Deadside. With plans to assault the heavens once again, Babel intends to bring cataclysm to the Earth. This is the writing on Tama’s scroll.

Tama races to the kingdom of Rex the Razer. Rex was a barbarian, a killer, and eventually became a king. As Tama’s friend, he informs her that he cannot stand against the insurmountable odds of Babel’s forces. To be responded with “I know a guy.”

Cut to Tama and Ninjak strolling through a maximum-security MI-6 black site prison. Teaming up with Punk Mambo a voodoo priestess and Shadowman, a man recovering from being possessed by a necromancer, and still possessed by a stronger power. Punk Mambo is helping Shadowman work through his horrors, being possessed as well as being recovered from the Deadside. Both have spent plenty of time on the other side, though one is more reluctant to help. Tama tells him that her Book of the Geomancer does spell out one detail in specific: if Shadowman is not in league with the team on this mission, the Earth will fall.

Shadowman agrees to join in, and Punk Mambo teleports the team to the Deadside. Unfortunately for them, their coordinates have landed them precisely in the middle of a great battle, right in front of Babel. There is no attempting a sneak attack here.

Valiant’s brought out some heavy hitters for this crossover title. Abilities of all kinds, will make for quite the tale. I particularly enjoy what Tama and T.A.D.D. must endure in order to reach Amy at the beginning. Babel seems like he’s got some crazy abilities of his own, so seeing what has happened so far, I know what I’m looking forward to in the next three installments. Heaven and hell, gods and demons, what else will rise up from this imaginitive series? Seeing Shadowman utilize his voodoo Loa and Punk Mambo’s equally incredible energies should make any comic fan want to sit up and take notice! Journey into the unknown with our team, and see what truly lies beyond.

Tama has traveled across time and space to put together the riddles she needs to answer. And what a team she has assembled: MI-6, voodoo and necromancy? They're really pulling out all the stops. I can't wait to see where this arc goes.

A fan of media on multiple platforms, I am always watching or playing something! Who knows what I will be on to next?
@mackeyp42
Previous From the depths of E3, comes a new Call of Cthulhu trailer
Next Black Butler: Book of the Atlantic (Anime) Review