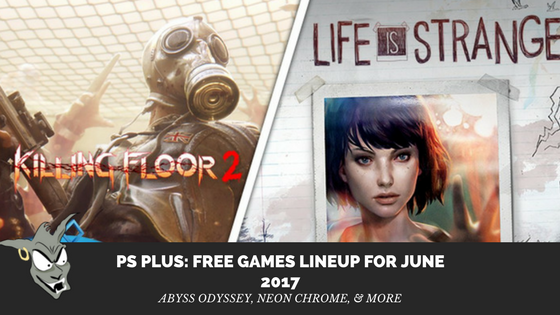 PlayStation Plus is back with its free games of June 2017 and we have some fine choices if I do say so myself. This month is Killing Floor 2 and Life Is Strange.

Life Is Strange has been on the top of critics charts ever since its initial release in 2015. It even received a BAFTA Games Award for Story.

That’s all well and good but what is it about? Life is Strange is an episodic graphic adventure videogame developed by Dontnod Entertainment and published by Square Enix. It follows the story of Max, a girl that discovers she can rewind time, as she finds out who she really is while saving her town from destruction. This game floats on the side of a teen drama and may not seem like it’s for you but once you get into it, you won’t put it down!

Now if you are thinking “Screw that, I just want to shoot stuff”, well do I have a great game for you. Killing Floor 2 takes place one month after the events of the first Killing Floor. Fighting in an outbreak of zombie-like creatures outside of Europe, which the first game was based, you’ll be in first-person causing mayhem and havoc with one mission: to kill every last thing that moves.

Fight As Your Enemies With A “Kirby-Like” Ability

On PS3, there will be Abyss Odyssey and WRC 5: World Rally Championship. In Abyss Odyssey you can play up to 4 unique characters in this side scrolling action-adventure game developed by ACE Team and published by Atlus. You’ll be fighting your inner demons and fight as your enemies with a “Kirby-like” ability.

On the PS Vita, there will be Neon Chrome and Spy Chameleon. Neon Chrome is a procedurally generated twin stick shooter where it is your goal to kill the Overseer. Fighting through waves of enemies and destroying the environment along the way gives you opportunities to experiment and make every death a new beginning.

Last but not least, Spy Chameleon is a challenging arcade-puzzle game. Use the Chameleon’s color changing power to sneak by unsuspecting creatures to grab the key and escape the level.

Don’t forget to download May’s PS Plus games before June 6th and on that note, see you next month!

Dylan is a writer, gamer, avid movie lover, and PlayStation extraordinaire. Currently, he attends Radford University in pursuit of a BS in Media Studies with a concentration in Journalism. When he’s not writing the next epic post (but you know he is), he plays games like Destiny, Uncharted, Wolfenstein/DOOM/Dishonored; long story short: If I played the game, I liked it; if I haven't played it, just remember that I'm in college.
@Dylanslegos
Previous Edge of Venomverse #1 (Comics) Preview
Next The Walking Dead A New Frontier – Episode 5 From The Gallows (PC) Review

Boston looks quite different from the shadows, in Vampire The Masquerade – Swansong. The latest …