The last episode saw Savitar take down Iris West. How will Barry and Team Flash react / recover? Find out in The Flash Finish Line.

Iris West has died. Run through by Savitar, right before the eyes of Barry Allen and Joe West. They were unable to save her. So what happens now? Do they bond together, and keep the predictions from coming true, or do they falter, allowing everything they have worked for, fade away. Will Barry become the broken Flash he saw in the future? OR is that what really happened?

As we watch the team struggle to face the reality of Iris’ loss, Iris regains consciousness for a moment. Long enough to deactivate a bit of Earth-2 tech that had disguised HR as Iris, and Iris as HR. So while not ideal, as one member had to fall, it was a member of house Wells, sacrificing in the name of house West. 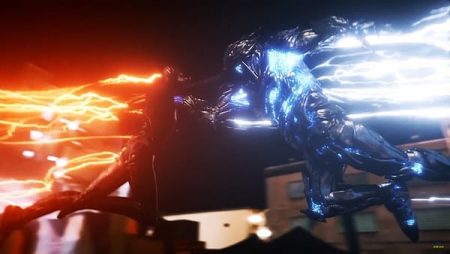 There was a moment in the last episode, where HR Wells’ response to Cisco did not sit well with me, but like the rest of the audience, we didn’t know what was happening. Wells did not provide a “see you later”, or a “catch you on the flipside” type of casual response when departing. He had an odd look in his eye, he tipped his cap, and said “until the next one.” Now neither the comment or the action by themselves mean much, but in the context we know now, HR was doing what he could to offer respect to his friend, while concealing his plans.

Wells whispers a message to Barry, for Cisco. Joe and the team realize that the future is changing again, this time, resembling more of the future they were originally slated for. Savitar notices this, and while he possesses the Speed Force Bazooka and Frost has Cisco, they plan on making Cisco pay for the change. 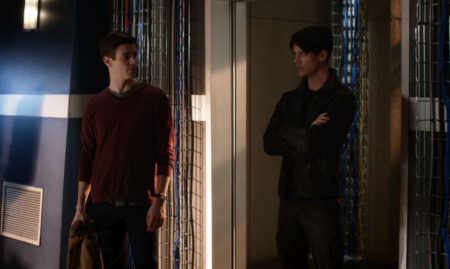 Back at STAR Labs, the team is trying to understand their current standings in the time travel ‘what happens now’ scenarios. Barry and Julian explain that with the future changing the way it appears to be, then Savitar will soon cease to exist. The question then becomes, how do they stop him from doing whatever he has planned, before that cesation happens. This is a marvelous time for the reveal that Julian has synthesized a cure for Caitlin’s Killer Frost ability. Now it becomes a matter of the how and when to get it administered.

Savitar seems to have a doozy of a plan b. In the event that Barry succeeded, he plans on blackmailing Cisco to alter the Speed Force Bazooka in order to make Savitar even more than a god. The plan is for Cisco to turn the bazooka into a genetic splicer, so that one Savitar can be turned into multiple, existing, theoretically, at every place and time from the beginning to the end of eternity. All connected, all wreaking havok. That is a heinous plan indeed.

Back at STAR Labs, Barry is contemplating what Leonard Snart had said to him, about Flash remaining a good guy, always. So with that in mind, he sets up a meeting with his future self. Barry appeals to the good that exists inside the future Barry. They talk about how a plan went awry when they were kids, in what ended up being one of their favorite memories.

The Barrys return to STAR Labs, to a very tense reception. Why is the nemesis returning with the hero? What is going on here? The remainder of Team Flash threaten the visitor, while the present Barry reassures his friends of what is happening. The team is relying on Tracy to come up with a way to help her boyfriends’ murderer.

They recruit Harrison Wells from Earth-2 to reason with her, to ease through her suffering to see the needs of the team. Iris is an incredible force of reassurance for future Barry. More than once, when future Barry tries to pull away from the team, it is Iris that rises to the occasion.

Future Barry claims he will bring Caitlin and Cisco home, though it was only a rouse. He took the team’s vulnerability to plant the philosopher’s stone in the breach room, causing a massive explosion inside STAR Labs.

Killer Frost is supposed to take Cisco out of the equation, only to find out Gypsy is here to save the day. Gypsy gets Cisco to meet up with the others, before he becomes a Cisco-cycle. Savitar claims that it does not matter, since the bazooka has been reconfigured.

Savitar and Frost head out to continue Savitar’s ascension. It requires both of them, as he can open a portal, and she can stop the speedster that will come for him – Black Flash (to those unaware, Black Flash is a speedster version of the grim reaper).

With him out of the way, Frost aids Savitar in becoming multiples of Savitar. However, they underestimated the sneakiness of Cisco being able to mislead them. Instead of being a splicer, the bazooka became a way for Jay Garrick to be released from the Speed Force. Now there are tho Flashes against Savitar, and two vibing heroes to contend with Caitlin/Frost.

Cisco is able to get the upper hand on Killer Frost, but denies her a swift ending. He gives her the option of returning to her life as Caitlin, if she wishes. Giving her the cure, he turns and leaves. Savitar stops him, only before he can kill Cisco, Caitlin uses Frost’s power to save her friend and teammate.

Barry figures out how to eject Future Barry from the Savitar armor, and quickly gain the upper hand in the battle. Choosing good over evil, Barry decides to shatter the Savitar armor, rather than use it to finish off his future self. Iris however, is not of the same mind. She fires a shot, ending future Barry’s existence, before any additional damage can be wrought.

After a touching funeral, Barry gives Cisco the message from HR Wells. The message was, that the sacrifice required strength, and it was Cisco that game him that strength. No matter how you splice it, this is an incredible sentiment.

Caitlin was in attendance for the funeral, though she kept a safe distance from the team. Confronting her old pals, she surrendered the cure to Julian. She declares she is no longer Caitlin, and yet no longer Killer Frost. She must venture out on her own to figure out what her new identity is.

Back at the Allen loft, Iris and Barry are having difficulty restraining themselves from bursting in laughter. These outbursts are halted by what seem to be a breakout of earthquakes in Central City. Only, these are not normal, as the disruption is coming from above the city, not beneath.

The Speed Force is bleeding into Earth, since the prison is unstable without an occupant, and they cannot exile Savitar now that he’s deceased. Being the ever-sacrificial-lamb, Barry determines that he must enter the Speed Force, as a penance for causing the Flashpoint event. Barry enters the Speed Force with a vision of his mother, and the disturbances disappear with him.

This has been quite the year for the Speedster team. A few ups, and a bunch of stressful situations. The team always find a way through, just like in any good story. If the series is to be believed however, there are so many enemies that Barry and the gang can fight them each once or twice and be on their way.

It seems to me, more of these villains should resurface, like they have done with Damian Darhk in the Arrow/Flash/SuperGirl/Legends crossovers. A villain can be bested, without having to disappear for good. I like how Captain Cold has resurfaced this season. Hopefully the writers will continue on this path of reusing assets. After all, Team Flash keeps advancing. Who’s to say that the villains aren’t hiding somewhere developing new nasty weapons of their own.

A fan of media on multiple platforms, I am always watching or playing something! Who knows what I will be on to next?
@mackeyp42
Previous New Spider-Man: Homecoming trailer shows off more Vulture and Spidey-suit
Next Final Fantasy XII The Zodiac Age’s Gambit System Revealed