Tom Hardy In A Venom Movie

We’ve all loved or hated Venom when he takes on our favorite heroes. We finally get to know more of his story in his own Venom Movie. 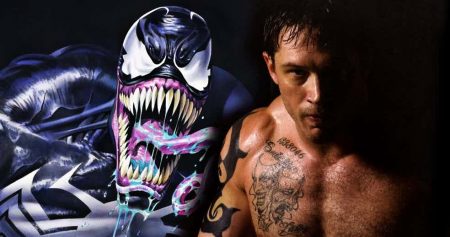 According to The Hollywood Reporter, Oscar nominee Tom Hardy is in final negotiations for the title role, while Zombieland director Ruben Fleischer is nearing a deal to step behind the camera. Production is set to begin this fall; the Venom movie is targeted for release on Oct. 5, 2018.

The news arrives ahead of the July release of Spider-Man: Homecoming, a co-production with Marvel Studios that reboots the Sony franchise, with Tom Holland reprising his role as Peter Parker from Captain America: Civil War. Venom isn’t connected to the Marvel Cinematic Universe, but it’s the first film in a long-planned expansion of the Spider-Man franchise, which Sony hopes will include a Silver Sable/Black Cat spinoff.

First announced in December 2013 alongside The Sinister Six, Venom was envisioned as the first pieces of a cinematic universe that would follow The Amazing Spider-Man 2. But with the release of that sequel, which earned mixed reviews and $709 million worldwide, Sony drastically changed its plans, resulting in the deal with Marvel to co-produce the reboot.

A fan of media on multiple platforms, I am always watching or playing something! Who knows what I will be on to next?
@mackeyp42
Previous One Piece: Unlimited World Red Deluxe Edition coming to PS4 and PC in August, Switch in September
Next Destiny 2 Gameplay Unveiled