Home / News / Surprise! Bayonetta has flipped her way onto the PC

Surprise! Bayonetta has flipped her way onto the PC

Looks like the surprise Bayonetta announcement was for a PC port of the first installment.

So last week there was an online counter, counting down to… something. And apparently, that “something” is a PC port of the original Bayonetta from Sega and developer PlatinumGames. While that might be a bummer for some, who were hoping for a sequel, it’s a boon for any PC gamer who hasn’t had the chance to dig into what’s a phenomenal game.

And with unlocked HD resolution and gameplay running at a smooth 60fps, this might be the version to get. It’s also the time to get it, since the Digital Deluxe edition of Bayonetta on the PC is available now, but for a limited time. Anyone who buys the game before April 25th will get a 5 track soundtrack sampler and digital art book. Those were previously available only as a part of the original release’s Climax Edition. So some nice little freebies right there.

But why port Bayonetta, a game that’s been available on consoles since 2009? Well according to Sega, it’s all part of a brand new initiative:

“We are dedicated to bringing high-quality, best practice PC conversions of our back catalogue games to our fans, and Bayonetta was a great fit.” Said John Clark, Senior Vice President of Commercial Publishing for SEGA Europe. “Bayonetta is one of the most often requested PC conversions of our games, so finally being able to launch it on Steam is fantastic. There’s more to come!”

Lock and load, and maybe throw a little gel in your hair, Bayonetta is available on the PC right now.

Jason's been knee deep in videogames since he was but a lad. Cutting his teeth on the pixely glory that was the Atari 2600, he's been hack'n'slashing and shoot'em'uping ever since. Mainly an FPS and action guy, Jason enjoys the occasional well crafted title from every genre.
@jason_tas
Previous Injustice 2 Trailer – Your Battles Your Way
Next Gigantic slip-cased Star Wars collection on the way from Marvel 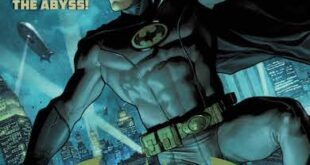 There’s a lot of the Dark Knight coming to comics shops this December, as Fear …