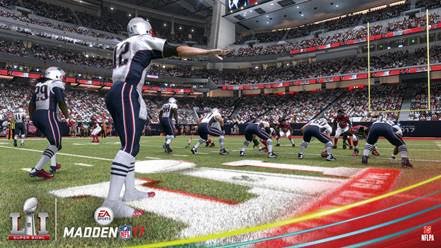 EA’s yearly football title has once again picked its winner for the Superbowl.

And the Superbowl winner is…

Yep, it’s the Patriots. Madden NFL 17, this year’s edition of the classic football title, has chosen the team from New England over the Atlanta Falcons. It’s honestly not all that risky of a choice, as the Pats are the favorites anyway (depending).

The sim was tight however, with only three points separating the two teams in the end. Apparently it didn’t feel that way all game long though, as New England would have to overcome a 10 point deficit in the third to win.

Want to read through the full tale of the tape? Scroll down and EA will reveal exactly that. Oh, and if you don’t already have Madden NFL 17, and want to pick it up for the day of the big game, it can be had for as little as $20 USD.

The sale won’t last long, and it looks like it’s digital only, so act fast if you want a copy. Get in on it here.

According to the official EA SPORTS Madden NFL 17 Super Bowl LI Game Simulation Tom Brady will soon stand alone as the only quarterback to ever win five Super Bowls, as the prediction calls for the New England Patriots to defeat the Atlanta Falcons 27 – 24 in Houston. Brady is also expected to once again earn Super Bowl MVP honors, making him the most decorated player in Super Bowl history.

The offenses came to play in the first quarter, with the Falcons relying on a steady dose of Devonta Freeman and Tevin Coleman doing damage both on the ground and through the air, with Coleman taking a pass out of the backfield 15 yards for the first score of the game. The Pats, unaccustomed to playing from behind, answered quickly with a score of their own with Tom Brady hitting playoff-favorite target, Chris Hogan for a 38-yard play action touchdown pass.

Atlanta continued the offensive onslaught in the 2nd quarter hitting a deep pass to Julio Jones to get into scoring position, and then finishing off the drive with a 5-yard Freeman rushing touchdown. The Falcons defense managed to contain the Pats offense as well, holding New England to a field goal and heading into the locker room with a 17 – 10 lead.

In the second half the tides began to turn, as the Patriots exploited an aggressive Falcons defense with short passes and quick attacks. Dion Lewis found a way to score on a 9-yard swing pass, and the Patriots added another field goal in the quarter as well. On defense, the Pats pass rush started getting to Matt Ryan, and blanket coverage of Julio Jones held the Falcons scoreless, giving New England a 20 -17 edge after three quarters.

The final period started as a defensive slugfest, with neither team able to get into scoring position. Things finally broke open late in the game when Matt Ryan put together a sustained drive, capping it off with a 12-yard touchdown to Mohamed Sanu Sr., giving the Falcons a 24 – 20 lead.

With under four minutes left to play, Brady and company returned to the field with their sights set on victory. They showed tremendous patience, riding short passes and the power run game to march the ball across midfield, but with less than two minutes to play they knew they had to find the end zone. The Falcons defense, harangued by Brady and company all day, stiffened and forced the Pats into a 4th and 4 situation with only 20 seconds to go. With his Super Bowl legacy on the line, Brady turned to his most trusted receiver, hitting Julian Edelman for the game-winning touchdown and history is made.

Brady’s final stat line showed him going 30 for 39 with 305 yards, while also being responsible for all three Patriots’ touchdowns on his way to MVP honors. LaGarrette Blount and Dion Lewis combined for over 100 yards on the ground, with Blount tallying 19 carries for 78 yards, while Lewis added 8 touches for 32 yards and a receiving touchdown. Julian Edelman claimed top receiver honors, hauling in nine passes for 102 yards and a touchdown, while Chris Hogan caught three balls for 50 yards and a touchdown.

Matt Ryan nearly managed to match Brady’s performance, racking up 287 yards and two touchdowns on a 24 for 36 performance. Ryan wasn’t perfect though, as he also tossed the game’s only interception. Though Freeman and Coleman were each able to find the end zone, neither had a particularly impactful performance, with Freeman managing 53 yards on 15 carries and Coleman struggling to 34 yards on 10 attempts. Though Julio Jones did manage to put up 89 receiving yards, the bulk of them came on one pass, and he finished the game with 7 catches and no scores. Mohamed Sanu Sr. proved dangerous though, adding six catches for 64 yards and a touchdown.

The Madden NFL Super Bowl prediction is one of the most well-known in the world, and was particularly spot-on when the Patriots last played in the Super Bowl. The 2015 prediction not only correctly forecasted the final score, but also accurately called that New England would overcome a 10-point 3rd quarter deficit and came within three yards of accurately forecasting Julian Edelman’s final receiving yardage total.

Jason's been knee deep in videogames since he was but a lad. Cutting his teeth on the pixely glory that was the Atari 2600, he's been hack'n'slashing and shoot'em'uping ever since. Mainly an FPS and action guy, Jason enjoys the occasional well crafted title from every genre.
@jason_tas
Previous February 8th Valiant Previews: Ninjak and Divinity III: Shadowman
Next DST’s new releases include a trio of femme fatals