This winter special tells stories throughout the years. Taking us between Cornwall and Massachusetts. Check out who Hellboy and his friends encounter in Hellboy Winter Special 2017. 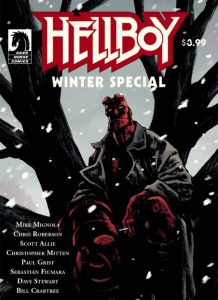 Taking place in Cornwall, March of 1891, as told by the secret journals of Sir Edward Grey. The Spring Equinox approaches, and England endures a rare winter storm. Sir Edward Grey and Sarah Jewell seek to investigate the source of the storm, as its accumulation is far more than a typical winter brush. They compare notes of saints and witches and legends, when they come upon the most startling sight. Entirely out of place, frozen in place. But where nothing of its like should exist. A ship, frozen solid, at the base of a cliff.

Jewell and Gray search the ship for clues. The condition of the ship is most peculiar, so there must be more to the story. They find the captain’s cabin, locked from the outside, his cold dead body grasping a bracelet mentioned in one of Gray’s earlier legends. Once Gray wrestled it from the captain’s grip, the storm ceased abruptly. Apparently the bracelet had been in the captain’s family for generations, though the family only knew of the legend. They clearly must not have known all it was capable of.

Fairfield, Connecticut, December 1961. It’s Christmastime, and the BPRD team are out on the town, when they encounter a mysterious man lingering on the street corner. They are then treated to a Santa who has knocked a police man unconscious. The team tries to clear the area while Hellboy deals with the holiday hooligan.

Hellboy contends with the troublemaker, when the mysterious man provides the professor, the BPRD team leader, a vital piece of information regarding their foe. And with that, as quickly as he had appeared, the man was gone. No name, no story, just poof. Though he apparently had a familiar face.

The Last Witch of Fairfield

Fairfield, Connecticut, March, 1979. Hellboy, Abe Sapien and Liz Sherman are taking a stroll throw some snowy woods. Liz is trying to determine how often Abe has been outside of his typical habitat at the BPRD. Hellboy is telling a story that makes no sense at first, in relation to Liz and Abe, and where they are. Turns out Hellboy is trying to remain on-point while everyone else is goofing off for once. Soon thereafter, the gang locates what they were looking for. Though nothing is quite as it seems. Strange things can be quite manipulative when you are far from home.

These three short stories give us just a taste of some of the wild encounters that Hellboy and the Bureau of Paranormal Research Division encounter. Some things are relative mundane, while others, are down right otherworldly.

Mignola and his friends bring us a unique assortment here. God Rest Ye Merry feels a bit comical, while our other two stories are a bit more of the dark and gritty tales were used to. I’m glad to see the inclusion of Vic in the BPRD, as we covered a story of his origin not too long ago. It’s always enjoyable to see the growth of such a team, especially with the unique range of abilities that have appeared over the years.

Whether taking on a raging Santa or tracking down children, Hellboy never disappoints. Leave it to the part-demon to do things no one else can, and entertain us while he's at it!

A fan of media on multiple platforms, I am always watching or playing something! Who knows what I will be on to next?
@mackeyp42
Previous Brutal Gamer Awards 2016 part 1: We pick our ‘Genre Bests’
Next Green Lanterns Vol 1: Rage Planet (graphic novel) Review