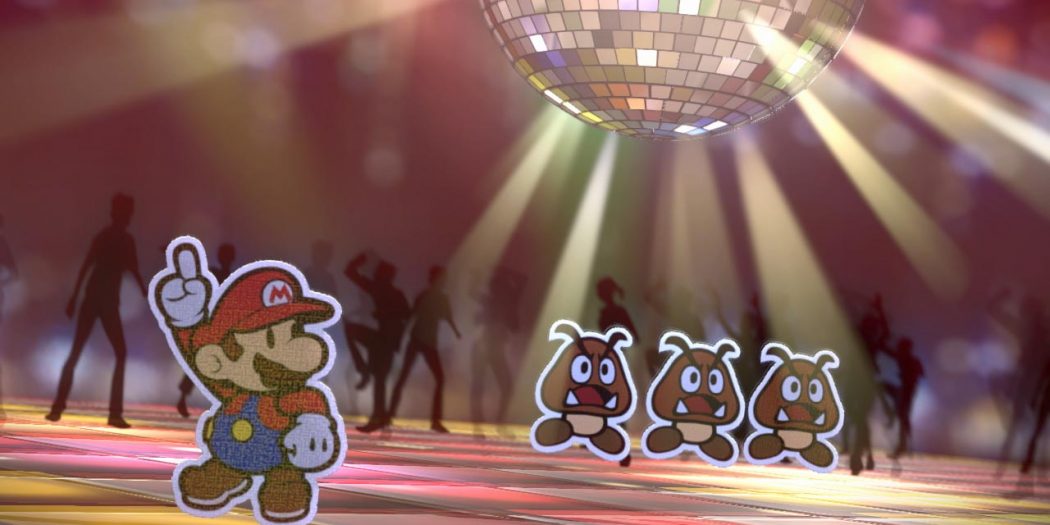 Paper Mario: Color Splash is a compromise between its story-driven past and its puzzling present. But rather than averaging out to be merely good, the end product is a great, guffaw-worthy game.

A Colorful Mix of What Works 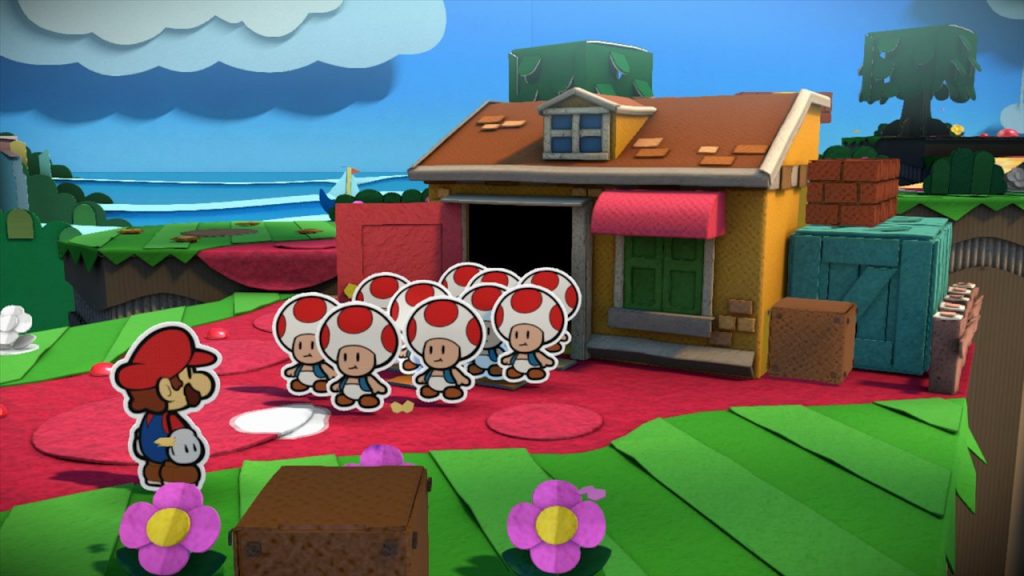 The core of Paper Mario: Color Splash’s gameplay loop is simple. The game is split up into stages that operate similarly to the platformers in premise (in so far as they end once you grab the star – or Paint Stars, in this instance).  Each of those courses vary hugely in locale though. And, especially towards the end of the game, they vary in other ways as well.

Early stages are basic in execution. You’ll make your way to the next section via walking, fighting enemies with hammer and jump cards, and picking up a Toad’s pants on occasion. Later areas though, get way more interesting. They’ll see you firing cannons from pirate ships, solving the mystery of a haunted hotel, and even cooking pizza. You’ll tackle trickier and funnier puzzles as you go, among a deluge of other things.

Combat is similar to Color Splash’s Paper Mario predecessor, Sticker Star.  Actions come via a limited resource.  Here, attacks are represented by cards.  Use a card, and you won’t have it any more, even if the action of the card is unnecessary for victory.  Fortunately, cards are plentiful, and the money with which you buy them is only more so.  While the cards are certainly a resource you’ll have to manage and keep track of, I very rarely found myself running out of options (indeed, I started most missions with the maximum 99 attacks).

Strategy will be familiar to players of previous entries in the series.  Hammers can’t hit flying enemies, but deal a healthy wallop to enemies on the ground.  Jumping on a spiky enemy will result in self-destruction, while it has no issues taking out paratroopas- or stacks of enemies ten thick.  Different variations of these will fill your hand in the late game. So will healing mushrooms, powerful fire and ice flowers, and an entourage of bad guys made momentarily good.

Those enemy cards are this game’s resulting compromise for ally characters.  They stick around once you use them (usually), taking hits for Mario and joining him for the victory pose.  Of course, they’ll disappear on the spot after that, but it’s an appreciated nod to the RPGs. 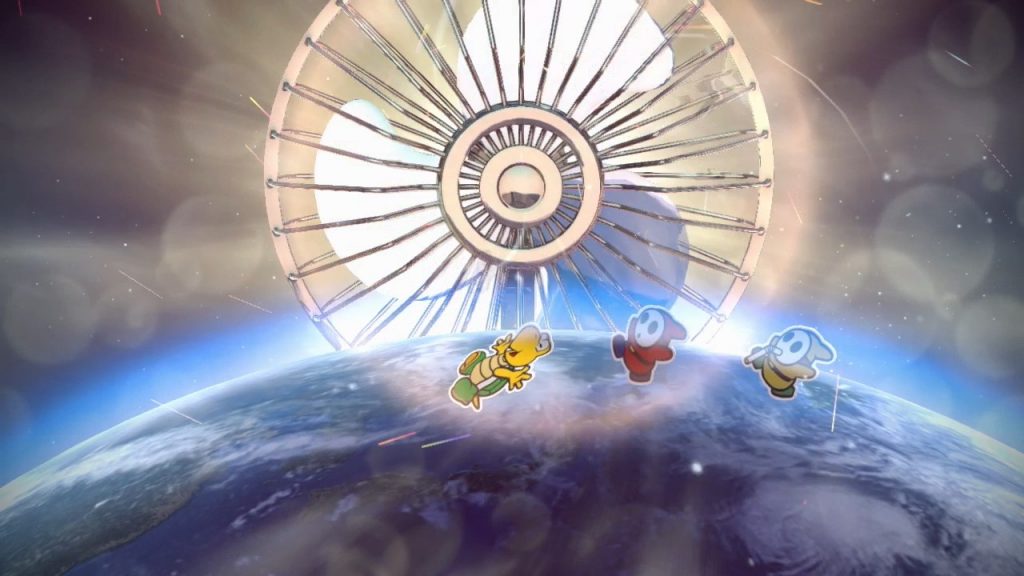 It’s not just a matter of selecting the card you want to use, though.  Players have to paint their cards before they send them out.  In the early game, when paint reserves are limited, I found the resource actually affected my thought process.  Sometimes I wouldn’t paint cards all the way (at which point they’ll deal more damage) when using them, in order to preserve colors for more important cards or later combat.  However, by the time I leveled my hammer’s paint capacity a few times (the resulting compromise for RPG elements), and earned enough money I could buy fully painted cards, I never really considered my supply in combat.  And if I ever ran low, I always had a couple cards to restock it, if necessary.

Beyond those basic strategic considerations (which compound with each other and enemy variants and line-ups to create a solid puzzle-solving element to encounters), combat is the usual for Paper Mario: that is, press the A button at the right time in order to improve your damage output, or block enemy attacks in turn-taking fashion.  And you’ll have to get quite good at it: a missed A is a wasted card.

Humor and the art style nudge this quest forward

Paper Mario: Color Splash is delightfully hilarious, creating humor in nooks and crannies as often as at the forefront.  Where combat doesn’t drive exploration, the idea that I might miss a joke ensures that I smack every wall, open every door, and keep my eyes peeled for subtle visual cues that not all is as it seems.

The visual cues are heightened by the game’s artistic style. Everything (save the game’s Things, which are real world objects that interact with the paper world with real consequences) is built of paper, cardboard, or confetti.  This aesthetic has driven the Paper Mario series at length. It’s never really been so impressive as what Color Splash pulls out of aging hardware though.

It’s pleasurable beyond the visual sense, too. Creases, folds, dioramas, and paper physics affect story beats, jokes, and exploration. And it all often provides hints for combat as well.

The game’s set-up (stop Bowser and rescue Peach by beating the Koopalings and collecting the Big Paint Stars) isn’t inherently entertaining, but the side stories, characters, dialogue, and visual gags go a long way in making sure even the main plotline is anything but predictable.  It can never be said enough: Paper Mario: Color Splash’s greatest strength lies in its uproarious humor.
Its weaknesses, on the other hand, come from small frustrations here and there.

You know what crumples my pages?

Game Overs aren’t infrequent, but they rarely come from combat.  Slow reactions may see Mario crushed by a boulder (and require you to reload from the title screen), and an eye not quite trained for the sometimes subtle (but usually obvious) visual cues that will save your life may see Mario crushed and the game reloaded several times.  While the game has plentiful (and often humorous) clues to point you in the right direction (and to make sure you have just the right Thing to beat the puzzle-based bosses), sometimes missing just one can send you backtracking, dying, or otherwise fumbling your way into a solution.

But those moments are infrequent, and avoidable with patience, a keen eye and inquisitive mind.  Paper Mario: Color Splash rises high above Sticker Star in every way, and while it’s not trying to be an RPG to match the series’ firsts, it sometimes surpasses even them with its delightful writing.  Who knew Toads could have so much personality? 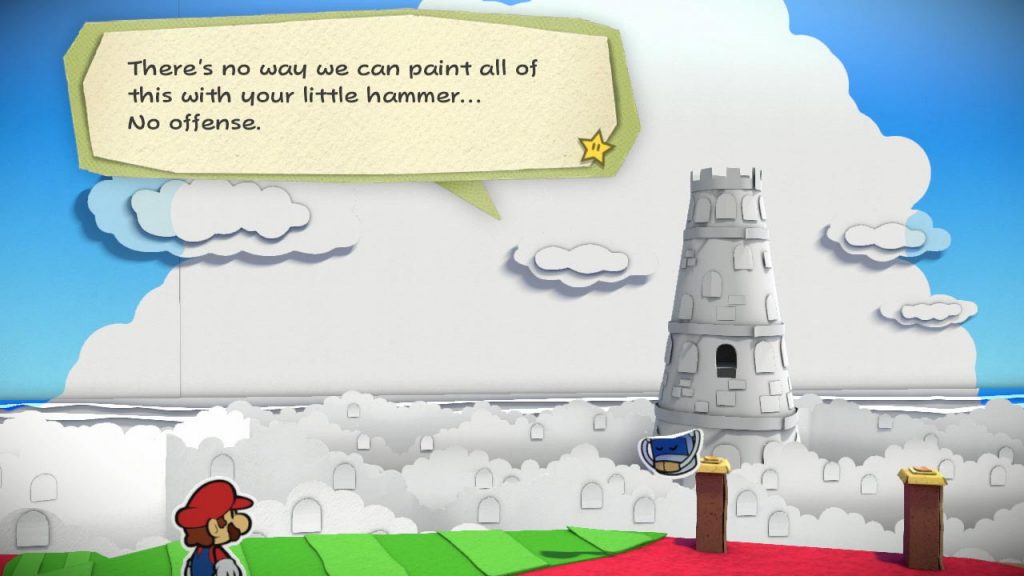 Paper Mario: Color Splash does the series proud with its fantastic writing, visual humor, and paper aesthetic.  Combat is much improved over Sticker Star, and the puzzle elements and sheer variety in mission types and structure take jumping and hammer-whacking to new heights.  While progress may come by whacking things randomly with your hammer, the solutions will always seem obvious in hindsight.  Minor frustrations (that sometimes, archaically, put you back at the title screen) are few, and no doubt could be avoided by players with faster reactions and sharper eyes (and minds) that mine.

Paper Mario: Color Splash is available for the Nintendo Wii U, and should be a definite pick-up for those with the console.

A Splash of Color

Great writing, striking aesthetics, and humor of all kinds come together for an improvement on the Sticker Star formula, and a title that can proudly stand beside its RPG forebearers.

Brutal Gamer's Nintendo Editor began his gaming life a little late- at five years old. But he's made up for it in the two decades since, gaming and writing about gaming with the same passion, fervor, and unrelenting love as his five-year old self.
Previous Savage #1 (Comic) Review
Next Marvel clarifies new X-Men Blue and Gold books