Savitar has Flash outrun, and Caitlin is harnessing her power. Will they work together or split apart in The Flash Killer Frost. 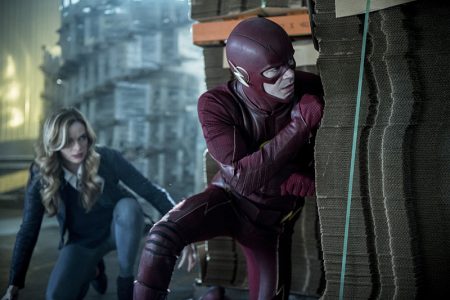 The Flash finds himself pinned to the ceiling by this mysterious being calling himself Savitar, the god of speed. Apparently Flash is the only one who can see Savitar, as the rest of the team just see Flash hanging out on the ceiling.

Joe turns to catch Alchemy, and Savitar disappers with our Scarlet Speedster. Savitar is having fun with Barry. Appearing all over town, multiple places at once, kicking and throwing him around like a ragdoll. Barry’s speed is no match for this blue mystery. It is only when a few of Flash’s meta friends appear to even the odds, does Savitar run for the hills. Only then is he outnumbered and outpowered.

Wally remains in his strange coccoon, and everyone is worrying about it in their own way. Joe goes out to investigate any lead he can. Cisco and the team continue to run tests, hoping to find a way to free Wally. Joe has a suspect in custody, and doesn’t get far in his interrogation before being interrupted by a meta who has other plans for the detainee. They lie about Wally, in order to get the detainee alone. Sometimes administering some vigilante torture is the only way to get the truth.

Caitlin kidnaps Julian in an effort to to track down Alchemy. She has Julian run searches related to Savitar, trying to learn who Alchemy is. She is doing everything she can to convince Barry to help her in her search.

Cisco learns that his brother was alive before Barry’s flashpoint. He is crushed, but insists to push forward in pursuit of Caitlin. Cisco doesn’t trust Barry right now, and tells Flash to stay put, the rest of the team will find Caitlin. She does not want to be found, and even slings icicles at Flash to prove her point. She is indeed giving into her fears of becoming the Killer Frost they have witnessed from another universe. Barry finds it difficult to proceed while he feels like his best friends hate him.

Barry and Iris find Joe giving into his temptation of saving Wally. He grabs a bone saw from the lab, and begins to cut Wally’s coccoon open. The coccoon blasts open, sending everyone against the wall, and Wally is standing in the middle of the room. He has a strange blank look on his face. He’s run for the hills. It takes a little time, but Wally begins to figure out his new strengths, Caitlin and Cisco continue to work for the greater good of the team, despite their strained relationships with Barry and the rest. Add to that, CSI Julian continues to wreak havoc where he can. Be sure to watch the next episode to learn more about what Julian will do next.

Barry has said it before, without Iris there would be no Flash. We see another depth of that again in this episode, when Barry’s closest friends are fighting against him. His colleague is against him. He does not think he is capable of moving forward, but that’s when Iris’s wisdom comes in to play. She stands with him reminding him that the team needs Barry to be the leader.

A fan of media on multiple platforms, I am always watching or playing something! Who knows what I will be on to next?
@mackeyp42
Previous Foundation Update Announced for No Man’s Sky
Next Steins;Gate 0 Receives European Release