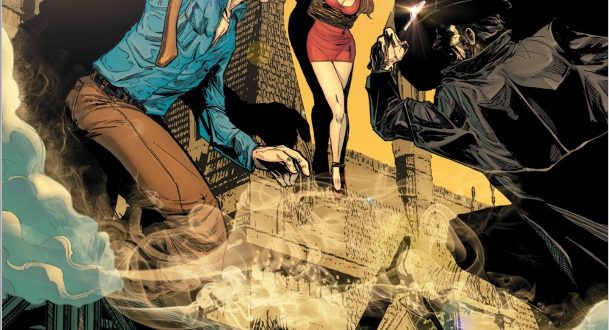 Ash Williams finds himself in a Hollywood backlot until things go awry in Evil Dead 2: Revenge of Jack the Ripper. 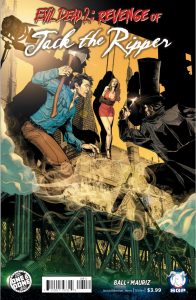 Ash has a friend that works in Hollywood, and as such, this friend gets Ash a part. Jumping at the chance to get into ‘the business’ and make a few bucks, Ash jumps at the chance.

Ash gets to the set, and quickly learns that things are not always what they seem. He finds his way to the food cart, griping about “what’s so great about this ripper guy anyway?” And that is when things get a bit more interesting. Ash meets one of the people on set who seems to know a bit more than the rest.

Could be a need around here for my highly-specialized work experience after all.

It’s only fitting for a Ripper movie set that things come in multiples, and Ash finds himself right in the middle of it all. After Ash gets a clue as to what is going on around him, he steps into quite a quagmire.

This unique timeline and theme provide a perfect situation to revive an old enemy. Though where will they go with it? Evil Dead 2: Revenge of Jack the Ripper revives not only the gore but the comedy of previous Evil Dead properties. Smiles and laughter where normally these things would not appear. It is a strange world indeed when a film writer gets his creepy hands on the Ex-Mortis. But who wins in the end? Does the writer win out, or does Ash save the day? Head to your local comic book store and find out!
Evil Dead 2: Revenge of Jack the Ripper

Evil Dead 2: Revenge of Jack the Ripper is brought to you by Space Goat Publishing.

What happens when you pit Jack the Ripper's blade and stealth against Ash's wit and self-bravado? This could be a clash of the titans like you've never seen before!

A fan of media on multiple platforms, I am always watching or playing something! Who knows what I will be on to next?
@mackeyp42
Previous Looking for a VR-centric headset? Check out Turtle Beach’s Stealth 350VR
Next Maldita Castilla (Review) Xbox One