Valiant Comics’ solicit for the first month of 2017 is loaded.

Starting the year with a bang

Divinity III: Stalinverse is probably the biggest thing coming up for Valiant, and it’ll be in full swing come January, 2017. The crossover shifts the Valiant Universe into a worldwide Soviet superstate, taking your favorite heroes with it.

This is no alt universe tale either, it’s the actual Valiant U that’s been transformed. And it certainly sounds like it’ll be up to Divinity to change it back. Or not. He was a Soviet cosmonaut you know.

While Stalinverse starts things off, there’s plenty more on tap that you’re not going to want to miss. Ninjak #23 starts off the Seven Blades of Master Darque arc, and serves as a fresh jumping on point for new readers.

And while that even is just starting, Bloodshot USA will be coming to a close with its fourth issue. That one’s bound to be plenty explosive, with it being about a Manhattan Island loaded with Bloodshots and all.

Scroll down and make your picks, January is only a few months away.

Welcome to the year 2017…where the Soviet Union has spent decades as the world’s reigning superpower and the Iron Curtain now encircles a planet riddled with war, strife, and oppression. Freedom is a thing of the past in the Stalinverse… So why can’t Russian intelligence officer Colin King shake the feeling that something has gone terribly wrong? He’ll put his freedom and life on the line to uncover the truth… Even if that means finding out whatever happened to the long-missing cosmonaut Abram Adams – the one man who just might hold the key to unraveling the dystopian world of today…

This is no alternate reality… This is the Valiant Universe as we know it and, soon, New York Times best-selling writer Matt Kindt (4001 A.D.) and blockbuster artist Trevor Hairsine (DIVINITY II) will lead Valiant’s event-level epic to the architect behind this new world order!

Out of DIVINITY III: STALINVERSE, Valiant’s leading legend – the unstoppable X-O MANOWAR – becomes the supreme fighting force of the CCCP in the next essential special ripped from the pages of the winter’s visionary comics events!

From bustling urban centers to the collective farms of the countryside, men, women, and children alike all idolize the same hero of the global Soviet republic: ARIC, SON OF THE REVOLUTION!

Returned to Earth from the stars with the ultimate nuclear deterrent – the indestructible X-O Manowar armor – the champion of socialism has singlehandedly consolidated the state’s military and political superiority at home and abroad. But when a surprise attack from the Deadside shines an untoward light on the modern-day Soviet Union’s darkest secret, will Aric pursue his mission…or justice for the quiet dead of an empire’s oppression?

The Valiant Universe as we now know it continues to reveal itself…as acclaimed writer Joe Harris (Snowfall) and superstar artist David Lafuente (Ultimate Spider-Man) present a star-shattering tale of sins, secrets, and tragedy for the global hero of the worldwide Communist state!

Everything has led to this… Out of the ashes of BOOK OFDEATH, Ninjak and Master Darque will collide in a punishing circle of death, destruction and hellfire! Join New York Times best-selling writer Matt Kindt (DIVINITY III: STALINVERSE) and blistering artist Marc Laming (Planet Hulk) here for a steelhardened jumping-on point that will leave Valiant’s seven-time Harvey Award nominated series forever scarred!

Reunited, but once again torn from the lives they’d carefully rebuilt, the Harbinger Renegades have found themselves attacked on all sides by a vicious new enemy – a radicalized army of psiot zealots determined to bring the system down by any means necessary. Can this band of former friends become the fighters they once were, or will they succumb to the temptation of a new power that’s more vicious than anything they’ve ever faced before? With Torque and Faith in mortal jeopardy, Peter Stanchek and Kris Hathaway must put the past behind them…and embrace their chosen destiny in what lies ahead.

Join Harvey Award-nominated writer Rafer Roberts (Plastic Farm) and superstar artist Darick Robertson (The Boys, Transmetropolitan) as they push the most dangerous superhero team in comics past the point of no return…and bring them roaring towards revolution!

On a mysterious island seemingly untouched by time, order is about to give way to instinct. Stranded with no hope of rescue, the Sauvage family must sacrifice the people they once were…and embrace the animals within! But as prehistoric monsters stalk them at every turn, will their newfound bestialness be enough to ensure survival, or will they be forever trapped at the bottom of the food chain? And when tragedy befalls the once close-knit family, will their last tether to humanity be severed once and for all?

ALL NEW ARC! ALL-NEW JUMPING-ON POINT! Fight your way through the “HEROSCAPE”!

Generation Zero managed to survive their first mission, and now duty has called on them to venture deep inside a perilous dimension only known as the Heroscape to see the world through a new set of eyes! They’ll discover their friends’ biggest secrets, their enemies’ darkest fears, and their town’s sinister connection to this imagination-fueled reality. But just because the Heroscape is imaginary, doesn’t mean it can’t kill you… And, from anime-inflected zombie hordes to psychedelic sci-fi warriors, all of Rook, Michigan’s most deeply buried fantasies are about to come roaring out of your daydreams!

Dream big because New York Times best-selling writer Fred Van Lente (IVAR, TIMEWALKER) and acclaimed artists Javier Pulido (Daredevil) and Diego Bernard (X-O MANOWAR) are gearing up for a brand-new jumping-on point that’s going to send Valiant’s temperamental teenage time-bombs blasting out of the suburbs and into their most grisly adventure yet!

Faith Herbert has lost many allies throughout her life… Her mother. Her father. Even a fellow Renegade. Despite this, Los Angeles’ high-flying hero has always defined herself by more than tragedy. But what happens when Faith must literally confront the ghosts of her past? A mysterious force is wrenching the passed spirits of Faith’s most loved ones back from beyond the grave…and into our world to break her mind and spirit! Can Faith overcome her greatest fear…or will these ghosts soon make her one of their own?

Liberty and judgment for all!

A weaponized virus has turned New York into a war zone…and Bloodshot is about to make his last stand for the heart and soul of every man and woman brutalized by the effects of a nanite-enhanced plague! But just when his one-man invasion of the Big Apple seems lost, the hard-coded weapon of mass destruction called Deathmate will re-appear to save the day – and secure Project Rising Spirit’s spot as the saviors of New York! Will her programming win out…or will the woman inside the machine seek the vengeance for which she has long yearned? In the shadow of the Statue of Liberty, a new war will soon be fought…and all of America is about to bear witness!

A&A: THE ADVENTURES OF ARCHER & ARMSTRONG #11
Written by RAFER ROBERTS
Art by MIKE NORTON
Cover A by KANO
Cover B by MARC LAMING
Variant Cover by DEAN HASPIEL

Obadiah Archer: Skilled marksmen, trained fighter, and…deranged circus freak?! Through the unfathomable forces of nature, Archer and Gub Gub – the pint-sized and deranged clone of Armstrong – have swapped minds! When Gub Gub’s body is kidnapped by nefarious forces, Armstrong and his long-lost wife, Andromeda, must race to save their friend and undo the horrendous merger of minds before the damage becomes permanent!

Years ago, the children of the experimental strike team known as GenerationZero were taken from their families by Project Rising Spirit, a private weapons contractor, and raised to be psychic soldiers. After years of taking orders, they have fought for and won their freedom. 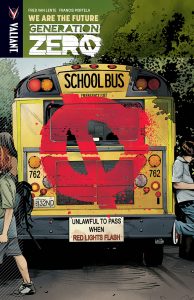 Now, the world’s most wanted teenagers have pledged to protect each other tooth and claw, while using their extraordinary abilities to right wrongs for a generation without a future… To fight for kids, just like them.

One of those kids is Keisha Sherman, whose boyfriend just turned up dead after a suspicious car crash in Rook, Michigan – a newly booming tech town that sprang from rags to superriches seemingly overnight. When Keisha makes a desperate plea into her webcam, the local high school suddenly finds itself with several unusual new students… But as word of Generation Zero’s presence spreads rapidly through the halls, this volatile band of teenage upstarts is about to discover that they’re far from the most extraordinary thing lurking behind Rook’s stainless-steel facade… 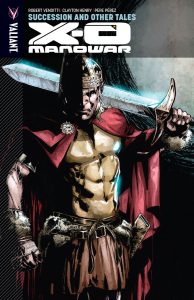 From the outcome of a bloodstained battle on the frontier of the Roman Empire that continues to be felt to this day, to the last days of Aric of Dacia and the future of the X-O Manowar armor all the way to the year 4001 A.D.!

Then: The life and times of the unstoppable X-O Manowar loom large as a massive cast of rising stars and superstar talents – including Amy Chu (Poison Ivy: Cycle of Life and Death), Adam Gorham (DEAD DROP), Jody Houser (FAITH), Mike McKone (Teen Titans) and more – come together for tales of Valiant’s most powerful hero…and his allies and foes alike!

Jason's been knee deep in videogames since he was but a lad. Cutting his teeth on the pixely glory that was the Atari 2600, he's been hack'n'slashing and shoot'em'uping ever since. Mainly an FPS and action guy, Jason enjoys the occasional well crafted title from every genre.
@jason_tas
Previous It’s Lost vs Damned in GTA Online
Next Six new Monsters created for Monsters Unleashed