A trio of Dead Rising re-releases on the way

Believe it or not, t’s been 10 years since the first zombie shambled out of Dead Rising’s shopping mall. And now Capcom is re-releasing the first 3 games in the series.

To be fair, this might be more like two and a half games since Off the Record is kind of the same game as Dead Rising 2. It stars Frank West, hero of the first game, instead of Chuck Greene. As I understand it, that’s pretty much the only difference outside of a few little story points. Still, it was enough to support a completely separate retail release at the time so, I guess technically this is three different games.

They’re three pretty good times too, with all three being crafted in the same mould. You can wear nutty outfits in all three. You’ll build weapons of the zany variety, most of which are capable of mass-slaughter in all of them too. Oh yeah, and all three games feature an open world where you’ll (re)kill hordes of the undead.

Each game kind of improved on that formula, culminating in the latest game, Dead Rising 3. That title had so many zombies on screen at once it almost got to be too much at times. And much like DR2 (the first DR2 that is) it doesn’t star Frank. That’ll be rectified in the forthcoming Dead Rising 4, which once again brings Frank back to the action.

In all, here’s what you can expect: 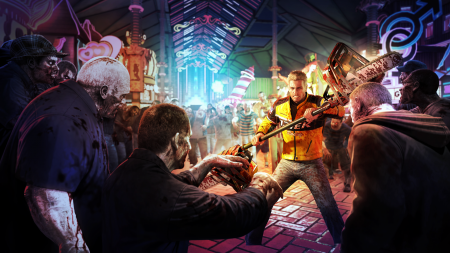 Of course these aren’t just re-releases. What’d be the fun in that?

All three games feature updates that take advantage of what current consoles can do. As a result, you can expect to get 60fps and a nice 1080p resolution from each.

The trio of zombie-smashers also have all the previously released DLC included. So you’ll get all the downloadable for whatever edition you pick. That’s a nice deal since, as I remember it, there was a fair bit of DLC for all of them with new costumes, weapons, etc…

As for when you’ll get to play these bad boys, September 13th will see the launch of Dead Rising, Dead Rising 2, and Off the Record on the PS4 and Xbox One. The original Dead Rising will also hit the PC on that same day, via Steam. As for the aforementioned Dead Rising 4, it’ll be along pretty soon too, ringing in the Holidays exclusively for the Xbox One on December 6th.

Jason's been knee deep in videogames since he was but a lad. Cutting his teeth on the pixely glory that was the Atari 2600, he's been hack'n'slashing and shoot'em'uping ever since. Mainly an FPS and action guy, Jason enjoys the occasional well crafted title from every genre.
@jason_tas
Previous SDCC 2016: Diamond Select stocks Ghostbusters, Nat’l Lampoon, Predator and more
Next Roll20 gets official with Wizards of the Coast