Hasbro will still have some GI Joe stuff out there if their SDCC display was anything to go by. And some of it was mighty impressive.

One of my top favorite properties from the 1980’s, GI Joe has long had a place in my heart. Those little 3.75″ figures were magic from day one, and I still love the line today. True, it’s been through a number of resets since then. It’s not all that hot with kids today, and has no current cartoon to back it up either, but Joe is still a strong brand with collectors.

And while there wasn’t a glut of new items shown at SDCC a few weeks ago, there was enough. Enough to show that Hasbro hasn’t totally forgotten about the line, and some things to give fans hope for the future. 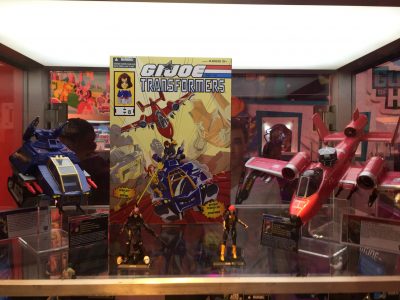 Taking the good with the iffy, with a possible eye forward

Just to couch what you’re about to thumb through, don’t expect any vehicles or single carded figures here. The only vehicles on display were the ones that were SDCC exclusive items.

I know that’s disappointing, since the lineup of vehicles is a big part of what makes the brand so great. All the figures were of the two-pack variety too, which is indicative of the current ‘collector’ line that’s running at Toys R Us stores. So this isn’t a fresh start for Joe… yet.

Remember that there’s a massive shared universe coming, one that’s set to include Joe, as well as MASK, Micronauts, Visionaries, ROM, and more. Actually, the Visionaries and Micronauts SDCC exclusives were in the same case as the Joes, which is kind of interesting.

And as I mentioned already, some of what was in the cases was impressive. For starters, there was a toxo-zombies pack that should make fans very happy indeed. As I remember it, the remake of that classic figure wasn’t all that easy to come by when it hit a few years ago.

There’s more too, including some cools sculpts of Snake Eyes and Storm Shadow, and a Cobra army builder pack. Have a look below.

Jason's been knee deep in videogames since he was but a lad. Cutting his teeth on the pixely glory that was the Atari 2600, he's been hack'n'slashing and shoot'em'uping ever since. Mainly an FPS and action guy, Jason enjoys the occasional well crafted title from every genre.
@jason_tas
Previous This is the Police Released for PC & Mac
Next Icon Heroes announces SDCC stock available again