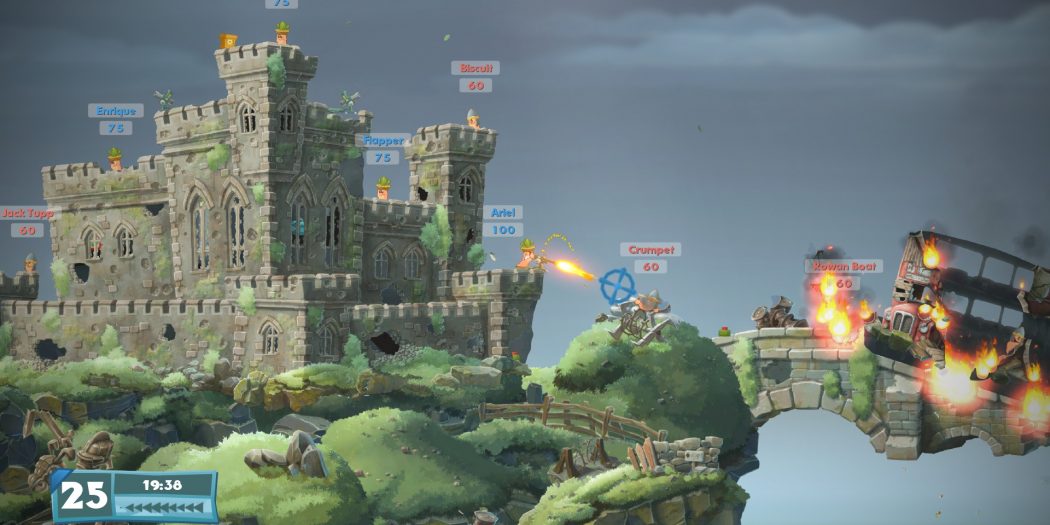 In it’s 21st anniversary, Worms and Team17 bring you the Worms you’ve grown to know and love, with an engine that recreates the classic gameplay.

When I loaded up Worms WMD the other day, my first reaction was ‘hey, I remember this game.’  While I wasn’t wrong, I wasn’t entirely correct either. Now, it’s been a while since I’ve played a Worms title, and was met with a combination of familiar gameplay and additional options. 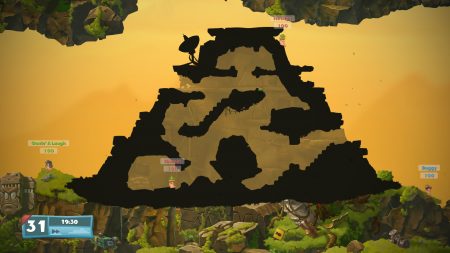 WMD presents the familiar weaponry such as grenades and bazookas, as well as new treats such as a fire punch and a jetpack. Now these two are enough to add some interesting dimension to the game for sure. In addition to being able to fly to new heights, and sucker punch your enemy, but there are buildings and vehicles to consider! Enter a tower where you can either take cover, or scale to a new vantage point. Personally I couldn’t get used to taking cover in the buildings, but being able to climb to new positions was a welcome addition to previous editions.

Now while buildings can provide some significant cover, who can complain about driving a tank? This new option in Worms WMD will keep your enemies on the run, to be sure.  Running and jumping over obstacles, while attacking from a distance, sounds like a great time to me.

A tank can be fun, but Team17 have taken things a step further: take to the skies  and challenge your foes like never before. Now you have the option to attack and fly away. Just because your opponent may be airborne, don’t think they can get away that easily. Mounted guns can be found from time to time as well. Machine guns and sniper rifles are only a few ways of evening the odds before things get too crazy. 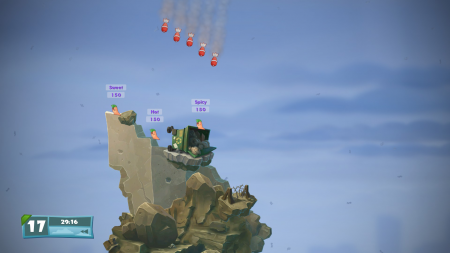 There were some details that were still a little rough in the preview copy provided, but by no means is this a big hurdle. Such things like images missing from menus are a tiny detail that can easily be rectified before release. Any Worms fans out there can breathe easy knowing another blockbuster is just around the corner.

Are you the type that pre-orders your games weeks early? If so, then boy are you in for a treat. All gamers pre-ordering before the August 23rd launch will recieve the “WMD All-Stars” content:

A fan of media on multiple platforms, I am always watching or playing something! Who knows what I will be on to next?
@mackeyp42
Previous SDCC 2016: Roll 20 takes tabletop online
Next SDCC 2016: Mezco’s One:12 gets even better