Raphael and Michelangelo join Leo and Donnie this Fall, as Tamashii completes their take on the classic ‘toon’ TMNT. 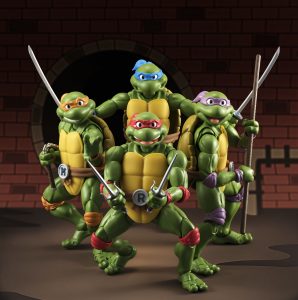 Distributed by Bluefin, who has all manner of awesome stuff, the remaining two Turtles finally have some release dates. Raphael and Michelangelo will complete the team, with Leonardo and Donatello already set to arrive this Summer.

All four of these new Turtles are a part of the S.H. Figuarts series of toys, which come from the extremely talented team at Tamashii Nations. Cast in the 6″ scale, all the Turtles come loaded up with tons of articulation and plenty of accessories, including their signature weapons. And since they’re all modeled after the cartoon versions that saw the airwaves back in the 80s and 90s, these should scratch that nostalgic itch like nothing else.

Yes, they’re a little on the pricy side at $62.99 USD each, but S.H. Figuarts figures are some of the best you can get. Pre-orders should be live now at Bluefin-authorized retailers, and you can check these bad boys out in the gallery below.

Jason's been knee deep in videogames since he was but a lad. Cutting his teeth on the pixely glory that was the Atari 2600, he's been hack'n'slashing and shoot'em'uping ever since. Mainly an FPS and action guy, Jason enjoys the occasional well crafted title from every genre.
@jason_tas
Previous A sci-fi mystery, Breached arrives later this month
Next 10 Cloverfield Lane hits home video next week