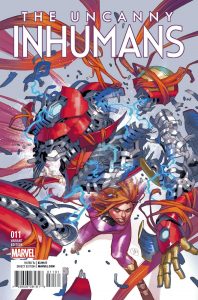 With one of their own at the center of the conflict, Medusa leads her people into battle this June in UNCANNY INHUMANS #11 – a Civil War II tie-in! Superstar creators Charles Soule and Carlos Pacheco bring the fireworks as the Inhumans wage war against…Tony Stark? Fueled by the can’t miss events of Civil War II #2 – Medusa cannot stay neutral any longer. And she’s bringing her armies to the Stark’s doorstep…literally! Plus – this issue features the dazzling debut of the much-anticipated Mosaic? But who is this new Inhuman? And are they friend or foe? Find out as the drums of war beat in New Attilan this June in UNCANNY INHUMANS #11!

The massive push for the Inhumans continues here in Uncanny #11, as the moon-based super-group takes the central position in another big crossover event. It’s easy to see why the Inhumans have gotten this monster-shove into a spotlight that they’ve really never enjoyed before of course, but it also seems like they’re having issues drumming up all that much fan-support and interest.

Will Civil War II’s crossover change all that? Stay tuned, this one’s just getting warmed up. Uncanny Inhumans #11 lands on stands and digital storefronts on June 29th from the team of Charles Soule and Carlos Pacheco.

Jason's been knee deep in videogames since he was but a lad. Cutting his teeth on the pixely glory that was the Atari 2600, he's been hack'n'slashing and shoot'em'uping ever since. Mainly an FPS and action guy, Jason enjoys the occasional well crafted title from every genre.
@jason_tas
Previous Horizon Zero Dawn falls to 2017
Next Yooka-Laylee joins those delayed to 2017