King of Fighters fans are in for a treat with some nice extras included in the Premium Edition of KoF XIV.

Among fighting games, I think it’s safe to say that the KoF series has hit that magical, legendary status. The games mash together all of SNK’s classic fighting game characters (and a bunch of new ones) into one storyline under one tournament to rule them all. For me anyway, it was up there with Street Fighter and Mortal Kombat for a while.

It kind of disappeared for a while there though, and didn’t evolve with the rest of the fighting game world like the aforementioned franchises did. According to SNK and new publisher Atlus though, that’s all changed this year with the release of the fourteenth game in the series, King of Fighters XIV adds in a bunch of new stuff, tweaks the gameplay, and upgrades the online experience. And to celebrate this new, updated KoF, there’s a pretty awesome Premium Edition scheduled for release that should be a hit with fans. 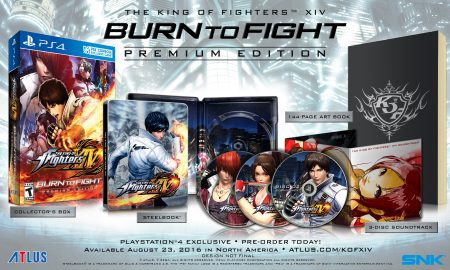 Like what you’re seeing? KoF XIV is set for release on August 23rd for the PS4,

Jason's been knee deep in videogames since he was but a lad. Cutting his teeth on the pixely glory that was the Atari 2600, he's been hack'n'slashing and shoot'em'uping ever since. Mainly an FPS and action guy, Jason enjoys the occasional well crafted title from every genre.
@jason_tas
Previous Overwatch (PS4) Review
Next New Independence Day game hitting for iOS/Android