Overwatch takes a concept that has been done before and brings it to the level that fans have come to expect from Blizzard. 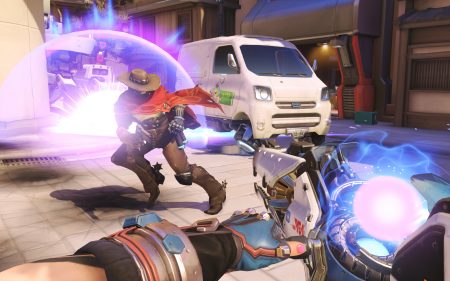 Class based shooters have been common in video games, and nearly everyone is familiar with them on some level. When discussing Overwatch, the first game that comes to mind is Team Fortress 2. Don’t be fooled by the similar objective based gameplay, however. Overwatch does enough to differentiate itself from any game that fans have previously come to love, and I’v got a feeling that soon enough, fans of the genre will fall in love with Overwatch as well.

Something that a lot of people have asked about here is the story, or lack thereof. A series of shorts released by Blizzard have tried to set up a sort of mythos, and they are a joy to watch, but they really don’t make a difference once you start playing this multiplayer-centric game.

The lack of a story isn’t something that bothered me at all while playing though. I admit that sometimes I will catch myself wondering more about the ins and outs of individual characters’ histories, but this will hopefully be remedied as Blizzard releases more of these shorts.

Here’s an example of one:

Unlike some in the genre, a campaign is not something that Overwatch finds itself wanting for however, since it’s so much fun as it is. The game has multiplayer only modes, including quick play, vs. AI, custom games, and a weekly rotating arcade mode. Most of my time has been spent in the quick play mode, jumping in and getting right to the action. Since I spent time with the game during the beta, I haven’t regretted this decision at all.

Games are as follows: two teams of six players fight over an objective. The objectives change from map to map, so the game type changes often enough as to not become monotonous. Players pick from a selection of 21 heroes, and these heroes are grouped into four categories: offense, defense, tanks, and support. Every character is vastly different, so instead of going into the intricacies of every one, I’m just going to tell you how play works.

The game plays very smoothly, as one would expect from a Blizzard title. The shooting is polished and fun, characters have different mobility options so that none of them feel similar, and the game has a strong feeling of balance. Some characters may feel overwhelming, but there is always a counter available. I haven’t run into any problems regarding mechanics or lag. Every game I enter feels smooth and crisp.

Overwatch plays very well, and that design is accompanied by fantastic graphical and, to a somewhat lesser extent, auditory design. 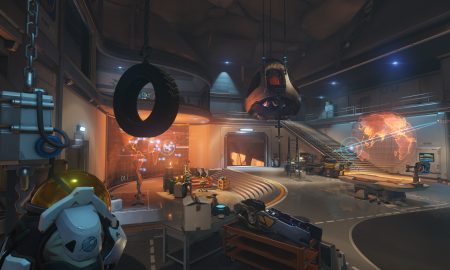 The game has a gorgeous art. Period. Every single map that’s in the game stands out from every other map, and each environment has a distinctive feel that is not touched by any other map. The same can be said for the characters. Aside from being drastically different characters in terms of design, every character has a unique, unmistakable feel that is definitively theirs.

The audio is another strong point in the game, but it is not as well designed as the graphical components. The music is compelling and strong, but it isn’t anything that you will be humming after you close down your play session.

Overwatch has some design components that I also feel are necessary to mention. Number one are the micro transactions. Players can purchase loot crates (alternately obtainable via leveling up though playing the game normally), but because the only things that can be earned from these crates are skins and other types of vanity items such as voice lines, I can’t say that I have a problem with the system’s inclusion.

Every moment that I have spent so far with Overwatch has been an absolute joy. Even when I am losing, the game feels so good to play that I am not sure I mind.

Partying up with friends is always easy, as friends can just be invited from the in-game social menu.  The post game “Play of the Game” system is intriguing at first, but gets old after you see the same characters get play of the game in the same way over and over. Similar to the play of the game, notable players are listed after a match, where other players in the game can vote on who had the most epic accomplishment. This is more satisfying, as supports can actually gain recognition here. 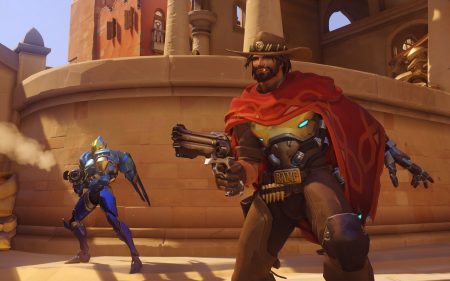 Since it launched, I have spent a lot of time with Overwatch, and I think that it is safe to say that I am really just getting started. I will be playing for months, and probably years, to come.

Overwatch is available on PC, Xbox One, and Playstation 4.

You won't want to put it down

Overwatch combines fun objective based mechanics, and strong shooting mechanics, to provide the best experience in the genre since the launch of Team Fortress 2. The game feels great, even when you're losing. Add in the fact that you can easily party up with friends, and Blizzard has a winner in Overwatch. The worst part about Overwatch is its entry cost: $60.00 on consoles and $40.00 on PC. Even at that price, there is no excuse not to experience this high quality shooter.

Erich was introduced to gaming by his grandfather before he could walk. Since then, he has grown up loving Nintendo and most games in general. He couples his love of videogames with journalism to cover news, provide reviews and tell it how it is in the gaming world.
Previous Brutal Roundup: 5/23 through 5/29
Next King of Fighters XIV gets premium edition