Home / Comics / Will DC Rebirth bring the DCU back to greatness?

Will DC Rebirth bring the DCU back to greatness?

The latest revamp of the DC Comics Universe starts tomorrow with DC Rebirth #1. And there’s cause to be excited for fans, as the book shakes up the New 52 era in a big way. 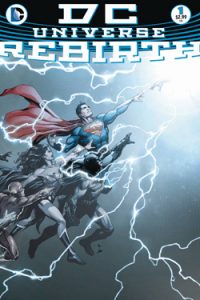 Creator Geoff Johns is so confident in what DC is doing here in this new soft reboot, that he’s actually offering to buy back any copies of Rebirth #1, if you don’t like it. He sounds pretty serious about the offer (which you can read about here) and it kind of looks like a relatively safe bet on his part.

I say that as a DC fan by the way, and one that’s not been totally and completely enamored with New 52. Sure there was a lot of good stuff that the last 5 years brought out, but there was plenty of iffy-to-bad content too. For all the incredible Batman runs and Aquaman and Green Lantern stuff, there was the eradication of way too many big characters (Nightwing and all the Justice Society stuff in particular), and some oddball changes that made no sense,  like with Lobo.

Good and bad is included in everything of course, but a lot of these books and characters were favorites of mine, and I was left feeling like all the coolness had been sucked out of them. Even the de-powered version of Superman and Bruce Wayne taking time off of being Batman, while really pretty well-done and enjoyable at times, left me wanting. Nobody wants to see Supes without his incredible power-set for too long, and that arc seemed like it ran forever.

Anyway, I’m just complaining at this point, and we’re supposed to be talking DC Rebirth. So… what is Rebirth? Well, it’s a refocusing more than anything else it seems. A return to basics for a good chunk of the characters that got too far away from what they’re supposed to be thanks mainly to the DC You initiative, and a reintroduction to some pre-New 52 stuff as well.

That might seem like a tall order to get ‘right’ and it probably is. Here’s the thing though, from the previews and leaked stuff that’s been slipping out over the past week and a half, it looks like there’s cause to be excited. Oh, and here’s a warning – Spoilers ahead. So if you don’t want anything spoiled at all, stop reading now and just know that Rebirth #1 is on sale tomorrow.

Still here? Okay, so basically it looks like there’s some serious fan-service being paid in this book. Not only do we get more of pre-52 Superman (who looks to be taking over the role as the DCU’s main Man of Steel), but we also see that the classic Wally West/Kid Flash is back somehow and acts as a guide to what’s happening. I haven’t read the book yet, but I’m actually excited to, and that says something.

For the last few months, I’ve been comic-ed out in general, but have been really dissatisfied with the direction that DC had headed. I haven’t liked what Marvel has been doing for years, but DC got me back after the whole Final Crisis debacle (I wasn’t a fan) with New 52. I genuinely liked some of what they were doing there. Well, I liked it for a while anyway.

The problem for me was that DC never seemed content to stay the course and believe in what they were doing. They were flaky almost from the start, altering character origins that they had just re-established (again, Lobo), and then sending massive ripples through their freshly re-forged universe with storylines like Forever Evil (which was admittedly solid) and DC You (which I’ll try to never mention again). It was too much for this longtime fan. Too ‘different’, too ‘edgy’, too… well, too much that wasn’t ‘DC’ for my liking.

DC Rebirth though, looks like everything that I was hoping that it would be. Sure there are some things that I don’t know if I care for yet, but overall it looks like it might be a winner. And if half of the rumored/leaked things turn out to be true, then I’m going to be pretty happy with it.

It also looks like it’s getting DC ever-closer to that pre-Flashpoint continuity, which is interesting. It’ll be something to watch, in the months and years to come, to see if more and more of the classic DCU starts oozing into this new universe. It’d really be something if the publisher basically pulled a 360 and went right back to where they began, with another reboot in the future.

If that’s what’s coming, then I’m happy with that too (yes, really), but for now I’ll definitely be reading Rebirth and the revamped (but not restarted, the numbering will remain for most – thank god) list of ongoing titles that are set to crossover into it. Cross your fingers, ’cause for now anyway, DC is looking like it might be in for a renaissance.

Oh uh, and then there’s that rumored thing where Dr. Manhattan from Watchmen might have been the spark that created the DC Multiverse… just a little nugget to leave you with.

Jason's been knee deep in videogames since he was but a lad. Cutting his teeth on the pixely glory that was the Atari 2600, he's been hack'n'slashing and shoot'em'uping ever since. Mainly an FPS and action guy, Jason enjoys the occasional well crafted title from every genre.
@jason_tas
Previous 4000 A.D.: Shadowman #1 (Comics) Preview
Next New Vampyr screens have teeth