Big Fight Club fan, or skip the book in single-issue format? Then you’re in for a treat. 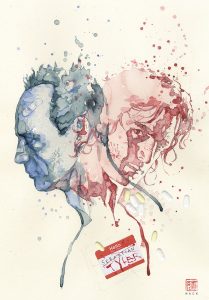 Ten years after starting Project Mayhem, Sebastian lives a mundane life. A kid, a wife. Pills to keep his destiny at bay. But it won’t last long; the wife has seen to that. He’s back where he started, but this go-round he’s got more at stake than his own life. The time has arrived . . .

Having just wrapped up it’s monster 10 issue run, Fight Club 2 is ready to be packaged into graphic novel form. But that’s far from all that Dark Horse Comics has planned for the critically-acclaimed title.

The publisher announced today that their recent Fight Club 2 limited series from property creator Chuck Palahniuk and artist Cameron Stewart will be getting the royal treatment. Not only will the collected edition that’s coming up feature a hardcover, but it’ll also be getting a whole separate release as a Library Edition.

This deluxe version will feature a special exclusive cover by David Mack (which you can see to the right) and will be slip-cased. The case will also have a tip-in plate autographed by Palahniuk and the book itself will be loaded for bear with 90 pages of extra content. If you’re a Fight Club mega-fan, you’re probably going to want this.

The standard version will be hitting the shelves on June 15th, highlighted by a 10 city tour by Chuck Palahniuk. As for that Library Edition, you’ll be waiting just a little longer for that one, as it releases in October- just in time to bust out your Tyler Durden Halloween costume.

Jason's been knee deep in videogames since he was but a lad. Cutting his teeth on the pixely glory that was the Atari 2600, he's been hack'n'slashing and shoot'em'uping ever since. Mainly an FPS and action guy, Jason enjoys the occasional well crafted title from every genre.
@jason_tas
Previous Is Nintendo going back to carts/cards for the NX?
Next EA announces Battlefield 1