Welcome back to the King of Fighters tournament…

It’s a nice little return to form for SNK’s venerable fighting game franchise, as King of Fighters is back for numbered-entry fourteen. Bringing tons of characters (including 19 new ones), a promised improved online system, an all-new 3D rendered look, and some of the biggest overhauls since KoF ’98, this is one that fans are probably going to want to check out.

I know I’m interested in playing, though I am one of those fans that I mentioned. Overall, KoFXVI looks like a fairly faithful new rendition of the fighting game series that we all know and love. Depending on where you sit, that’s not a bad thing by any means, as there’s a reason that King of Fighters is such a long-lived line of titles.

Simply put, the gameplay is catchy and keeps you playing, a big reason for which is that 3 vs 3 formula, that allows you to fight using story-appropriate teams, or mash-up squads made of your favorite characters. I remember playing ’98 more than any other fighting game at the time, thanks to that fact. Tagging up Art of Fighting and Fatal Fury guys was just too cool- especially for a long-time SNK fan.

Anyway, the game arrives on August 23rd, exclusively for the PS4, and will run you $59.99 USD. There’s a nice little bonus too, if you pre-order the game, in the form of a steelbook case with Kyo Kusanagi emblazoned across the cover. 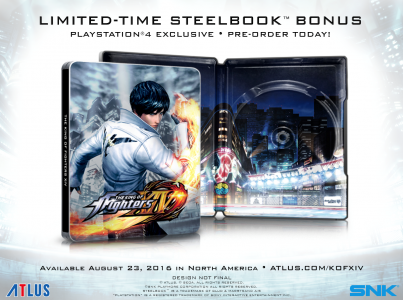 Highlights are listed below and make sure you check out the second trailer underneath that to see way more of the game in action.

Jason's been knee deep in videogames since he was but a lad. Cutting his teeth on the pixely glory that was the Atari 2600, he's been hack'n'slashing and shoot'em'uping ever since. Mainly an FPS and action guy, Jason enjoys the occasional well crafted title from every genre.
@jason_tas
Previous Fragments of Him coming to Steam in May
Next Shadow Tactics – Blades of Shogun new teaser trailer