DST has announced another monster assortment of stuff on the way to comic and specialty stores soon.

Okay so I’m a sucker for Minimates, and that means that there’s a ton of stuff here that I’m probablt not going to be able to avoid buying. Not that that’s a bad thing really, but with new Aliens, Predator, and TMNT Minimates on the horizon, well, I’m gonna need more shelf space is all.

Oh, and there’s plenty more to look forward to as well from Diamond Select Toys, including the latest retro-inspired Marvel figure in the form of Daredevil. Have a look at what’s on the way in the months to come: 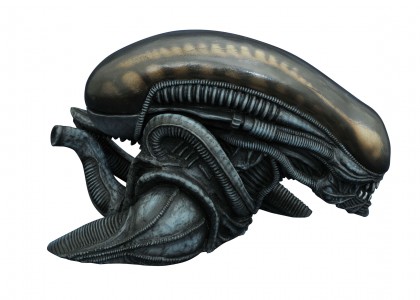 Alien Big Chap Vinyl Bust Bank
A Diamond Select Toys release! It’s very cold in space, so what better place to keep your cold hard cash than in this Alien bank? Based on the “Big Chap” xenomorph from the 1979 Alien movie, this approximately 8” long vinyl bust features detailed sculpting and paint, as well as a coin slot and access door that turn it into a fully functioning coin bank! Keep financial predators at bay! Packaged in a clear polybag. Sculpted by Eli Livingston! (Item #FEB162463, SRP: $22.99)
http://diamondselecttoys.com/alien-big-chap-vinyl-bust-bank

Aliens Minimates Mini-Figures Series 3 Asst.
A Diamond Select Toys release! Just when you thought it was safe to go back to the Nostromo, DST has returned to the doomed space ship for a full assortment of Minimates based on the original Alien movie! This assortment of two-packs features Narcissus Ripley with Narcissus Space Suit, Space Suit Dallas with Space Suit Lambert, Ash with Frozen Alien and a rare, one-per-case variant set of Battle-Damaged Ash with Frozen Alien! Each 2” Minimates mini-figure features 14 points of articulation, and features fully interchangeable parts. Each two-pack is packaged on a full-color blister card. (Item #FEB162464,SRP: $9.99/ea.
http://diamondselecttoys.com/aliens-minimates-2-packs-series-3-asst

Batman The Animated Series Gallery Batman 9” PVC Figure
A Diamond Select Toys release! He is vengeance! He is the night! He is Batman, the first Batman: The Animated Series Gallery figure from DST! Based on his appearance in Batman: The Animated Series, this 9-inch scale static PVC figure of Batman depicts him alighting on a rooftop, with a Batarang at the ready. Batman is in scale to previously released Femme Fatales PVC figures, including Batgirl and Catwoman, and is sculpted with a high level of detail with exacting paint applications. Packaged in a full-color window box. Sculpted by Varner Studios! (Item #FEB162458, SRP: $45.00
http://diamondselecttoys.com/batman-the-animated-series-gallery-batman-pvc-figure 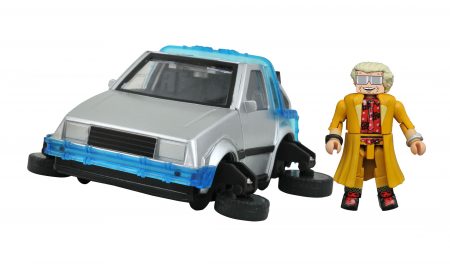 Back to the Future 30th Ann. Minimates Hover Time Machine Mini-Vehicle
A Diamond Select Toys release! Where you’re going, you don’t need roads! Why? Because this mini-vehicle of the Time Machine from Back to the Future Part II is in hover mode, that’s why! With its tires locked in hover position, this 4-inch Time Machine glides across the floor on a second set of hidden wheels, and its gull-wing doors open to seat two Minimates mini-figures. It even comes with a new mini-figure of Future Doc Brown in his wraparound sunglasses, plus a brand-new, non-poseable micro-figure of his dog, Einstein! Doc features 14 points of articulation and has fully interchangeable parts. Packaged in a full-color blister card. (Item #FEB162472, SRP: 19.99)
http://diamondselecttoys.com/back-to-the-future-30th-anniversary-hover-time-machine-minimates-vehicle

Batman The Animated Series Premier Collection Poison Ivy Statue
A Diamond Select Toys release! Every villain has that time they “almost got” Batman, and Poison Ivy is no different. Based on her appearance in the classic Batman: The Animated Series episode “Almost Got ‘Im,” this approximately 12” resin statue depicts the plant-loving Pamela Isley wearing a black outfit and holding one of her poisonous pumpkins, while standing in Gotham City’s pumpkin patch. Limited to only 3,000 pieces, this resin statue comes packaged in a full-color box with a certificate of authenticity. Sculpted by Clayburn Moore! (Item #FEB162457, SRP: $150.00)
http://diamondselecttoys.com/batman-the-animated-series-premier-collection-poison-ivy-statue

Dragon Age Inquisition Select Morrigan Action Figure
A Diamond Select Toys release! From out of the world of Thedas comes the first-ever Select action figure based on the hit video game series Dragon Age! This 7-inch scale figure of Morrigan, a Witch of the Wilds, features approximately 16 points of articulation, as well as an accessory of her trademark staff and a diorama base. It comes packaged in the display-ready Select packaging, with side panel art for shelf reference. Sculpted by Gentle Giant Studios! (Item #FEB162473, SRP: $24.99)
http://diamondselecttoys.com/dragon-age-inquisition-select-morrigan-action-figure 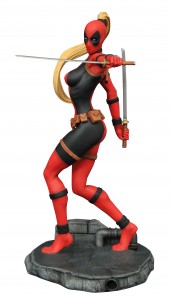 Marvel Gallery Lady Deadpool 9” PVC Figure
A Diamond Select Toys release! She’s beautiful! She’s deadly! She’s Lady Deadpool, and she’s the newest Marvel Gallery PVC figure based on the heroes and heroines of the Marvel Universe! The most lethal of the Marvel ladies so far, Lady Deadpool stands approximately 9” tall and wields twin katana swords and a pretty killer ponytail atop a small diorama base. She is in scale to Captain Marvel, Lady Thor, and all other Marvel Gallery PVC figures. Packaged in a full-color window box. Sculpted by Alejandro Pereira! (Item #FEB162462. SRP: $45.00)
http://diamondselecttoys.com/marvel-gallery-lady-deadpool-pvc-figure

Marvel Retro Cloth Daredevil Action Figure Gift Set
A Diamond Select Toys release! Finally, the devil has come to the Marvel Retro line! Never released in the classic Mego toy line of yester-year, streetwise superhero Daredevil is the latest Marvel character to get the Retro action figure treatment from DST! This gift set features one classically-styled red-costume Daredevil figure, in a vintage-style box, plus two additional heads and outfits: his original yellow costume and his alter ego, blind lawyer Matt Murdock! With interchangeable heads, hands, costumes and accessories, you can display your Daredevil however you want! Packaged in a full-color gift tray with a booklet about Daredevil, retro-style figures, and the creation process! Designed and sculpted by EMCE Toys! (Item #FEB162460, SRP: $80.00)
http://diamondselecttoys.com/marvel-retro-daredevil-action-figure-limited-edition-box-set

Predator Minimates Series 2 Two-Pack Asst.
A Diamond Select Toys release! Time to head back to the jungle, for another assortment of Predator Minimates! This all-new assortment of 2-inch Minimates mini-figures features characters from all three Predator films! Royce from Predators comes with that film’s Berserker Predator, Predator’s Blain comes with Predator 2’s Shaman Predator, and Predator’s First Appearance Dutch faces off with the Cloaked Jungle Predator. Plus, be on the lookout for the rare, one-per-case variant set of Final Battle Dutch and Cloaked Jungle Predator! Each Minimate features 14 points of articulation and fully interchangeable parts, and each two-pack comes on a full-color blister card. (Item #FEB162471, SRP: $9.99/ea.)
http://diamondselecttoys.com/predator-minimates-2-packs-series-2-asst 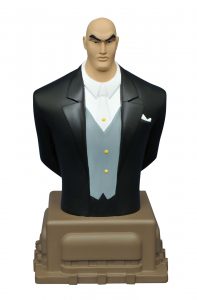 Superman The Animated Series Lex Luthor Resin Bust
A Diamond Select Toys release! Everyone has their heroes, and to some, that hero is Lex Luthor! Determined to expose the alien Superman for the false god he really is, the focus of Metropolis businessman Lex Luthor is captured in this approximately 6-inch resin bust, which places him on a pedestal inspired by the architecture of his city in Superman: The Animated Series. Limited to 3,000 pieces, this numbered bust comes packaged in a full-color box with a certificate of authenticity. Sculpted by Varner Studios! (Item #FEB162459, SRP: $59.99)
http://diamondselecttoys.com/superman-the-animated-series-lex-luthor-resin-bust

Marvel Select Venom Action Figure
A Diamond Select Toys release! Back by popular demand, it’s what many have called the greatest Venom action figure ever made! This 7-inch scale action figure of symbiotic Spider-man foe Venom features 16 points of articulation and almost a dozen interchangeable parts, including hands, heads, a removable tongue, and a back attachment, so you can re-create his classic, modern and “Madness” appearances! Packaged in the display-ready Select packaging, with side panel artwork for easy shelf reference. Don’t miss out on this sought-after figure! Sculpted by Jean St. Jean! (Item #AUG121762,SRP: $24.99)
http://diamondselecttoys.com/marvel-action-figure-archive-marvel-select-venom-action-figure

Jason's been knee deep in videogames since he was but a lad. Cutting his teeth on the pixely glory that was the Atari 2600, he's been hack'n'slashing and shoot'em'uping ever since. Mainly an FPS and action guy, Jason enjoys the occasional well crafted title from every genre.
@jason_tas
Previous Valkyria Chronicles Remastered is coming to the PS4
Next YouTube to track ‘top trending’ games starting right now