Home / Comics / The dead rise in Marvel Comics… or something

The dead rise in Marvel Comics… or something

Yet another of Marvel Comics’ famed teasers arrived this week with a simple one sheet that reads “DEAD NO MORE”. 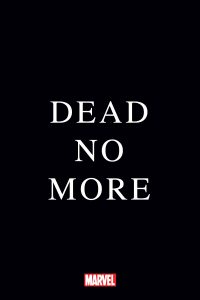 Lots of ways that that can be read, don’t you think? It could be that we’re talking about a new Marvel Zombies book (oh lord, I hope not), or maybe a new ‘big event’ book for this coming Summer. And then again, and probably most likely, we could be looking at the return of a ‘dead’ hero (or villain).

This is comics after all, and most characters that get the axe at some point do indeed make a return from the grave. Lately of course, we saw the death of Wolverine, one of the biggest and most-popular comic book characters of all time. I think a return for him would probably be my guess, if I had to take a stab at it too.

While we do have Old Man Logan running around in the mainstream Marvel U post-Secret Wars, but he’s not quite the same as the classic canucklehead. I’d love it if we were looking at Logan making a comeback, but who knows at this point?

We’ll keep you posted on anything further that breaks.

Jason's been knee deep in videogames since he was but a lad. Cutting his teeth on the pixely glory that was the Atari 2600, he's been hack'n'slashing and shoot'em'uping ever since. Mainly an FPS and action guy, Jason enjoys the occasional well crafted title from every genre.
@jason_tas
Previous Guitar Hero Live continues to rock out in 2016
Next Watch the first minute of the X-Files revival right now