The final Super Smash Bros direct has aired- and revealed with it two brand new fighters.  Corrin hails from Fire Emblem Fates, a male or female avatar who compliments both the Fire Emblem and Swordfighter line-ups with some powerful and interesting moves (including a spear attack that allows Corrin to pin foes to the ground).  Dragon transformations both complete and on an appendage by appendage basis supplement the sword strikes to create a unique addition to the roster.

We also meet Bayonetta, who also sports two variants (the original and the Bayonetta 2 version).  She brings a great many of her games’ traits over in many ways: she struts about, she utilizes Witch Time, long combos, and Jeanne even inspires one of her color schemes.

Both Bayonetta and Corrin are expected to be released in February 2016, whereas previously announced Cloud Strife is already available for purchase.  The character and his stage are available for $5.99 per console, or $6.99 for both.  Bayonetta will launch for the same (also including her own stage), while Corrin (who only brings new music to the existing Fire Emblem stadiums) will sell for $4.99 per or $5.99 combined.

Hands on with Cloud reveals an interesting Sword Fighter whose Limit Break adds a new advantage to FFA players who enjoy sticking to the side lines.  His Limit Broke Down-B kills foes near 60%, while his other moves pack plenty of punch on their own already.  The Midgar stage, meanwhile, presents a layout familiar to Battlefield fans, with an added twist: players can acquire the aide of powerful summons like Ifrit and Odin who each affect the field in different ways.  One summon cuts the field in half, for example, while another calls down a hugely effective (and visually arresting) beam of power. 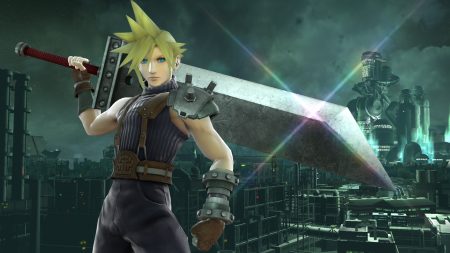 In our several hour-long period of hands on once the character became available, we came away excited to play the Final Fantasy guest more and impressed by the amount of fun his new stage brings.  While the inclusion of only two songs is unfortunate, what’s there works well within the Smash Bros album.

A final line-up of Mii Costumes was also revealed, including nods to Geno from Super Mario RPG, Tails and Knuckles from Sonic the Hedgehog, Ashley from WarioWare, and more.  The Chocobo Hat and Geno Outfits are available now, while the rest are assumed to follow come February.

This Smash Fan is excited for the newest additions, and is content with the overwhelming amount of content the completed product will have.  February can’t come soon enough.

For more on the latest, including character trailers: Smash Bros

Brutal Gamer's Nintendo Editor began his gaming life a little late- at five years old. But he's made up for it in the two decades since, gaming and writing about gaming with the same passion, fervor, and unrelenting love as his five-year old self.
Previous Ready for a G.I Joe shared universe… with M.A.S.K., Visionaries, ROM, and Micronauts?!
Next Turok: Dinosaur Hunter returns this week