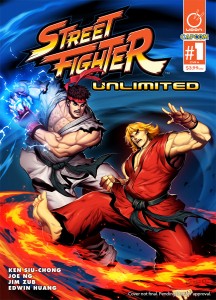 Never done before by the publisher, day and date digital releases have become pretty much the norm in the comic book realm. What that means, just in case you’re unaware, is that a comic hits digital distribution channels the same day as it arrives in comic book stores. So you read the book on your iPad or in a comic book form on launch day- your choice.

Until now, that was something that Udon really didn’t get into, so this new Street Fighter comic will be the first in the line. Of course, it’s also the first issue of the brand new run for the World Warriors in the realm of the printed page.

It’s also a book that will pay homage to the series’ rich history in the gaming realm with a monster slate of variant covers available at stores like Amazing Comic Cons, AOD Collectables, Books-A-Million, GAME, GameStop, Heroes Haven, Newbury Comics, and Strange Adventures. And then there’s that interlocking image.

Shipping with a pair of standard covers from painter Genzoman and UDON artist Jeffrey “Chamba” Cruz, the book will offer a 12 part interlocking cover image. The finished illustration will include over 6o Street Fighter characters from throughout the entire stable of fighters in Capcom’s long-running series – which is all of them incidentally.

If you’re a Street Fighter fan, this is one not to miss, the book lands on the shelves and in digital stores today.

Jason's been knee deep in videogames since he was but a lad. Cutting his teeth on the pixely glory that was the Atari 2600, he's been hack'n'slashing and shoot'em'uping ever since. Mainly an FPS and action guy, Jason enjoys the occasional well crafted title from every genre.
@jason_tas
Previous Final Smash Bros Broadcast Date Announced
Next Dark Horse Comics to publish charity tie-in book Angel Catbird