The world’s biggest toy store is getting a Spider-Man filled wave of DST’s Marvel Minimates figures, and a special deal that’ll net you two-for-one (or four-for-two as the case may be). 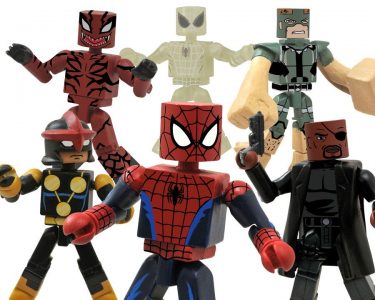 With a pretty nice assortment of characters on the roster, Marvel Minimates series 20 (of Toys R Us exclusives) is ready to go at TRU’s everywhere. And celebrating this 20th volume of the popular minifigures, the toy retailing giant has a pretty sweet deal happening.

Now though Friday November 20th (two weeks), when you buy one two-pack of wave 20, you’ll get another for free. So basically, you’re getting four figures for the price of two. Quantities are reportedly going to be limited on these though, and raincheck aren’t available on wave 20, so if you want them you better act with some haste.

Oh, and once these guys are gone, you can expect to see wave 21 arrive. And that one? It’s all about Secret Wars; best make some room on the old shelf.

Jason's been knee deep in videogames since he was but a lad. Cutting his teeth on the pixely glory that was the Atari 2600, he's been hack'n'slashing and shoot'em'uping ever since. Mainly an FPS and action guy, Jason enjoys the occasional well crafted title from every genre.
@jason_tas
Previous Battleborn delayed, hits in Spring of 2016
Next More new music arrives for Guitar Hero Live