Although there isn’t a ton to like out there on the racks, there are some can’t miss books, including the pivotal 45th issue of Batman and the return of some old school Lois and Clark. 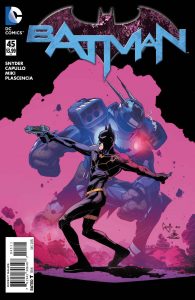 I have to admit, I haven’t been the best Batman fan. Now don’t get me wrong, because since Scott Snyder and Greg Capullo debuted on the book with the New 52 relaunch of DC’s universe, I’ve been a loyal reader. Their take on the Dark Knight has been one of the most iconic ever, fitting in perfectly with the current view of the character, which basically took center stage way back in the 80s with The Dark Knight Returns.

Here’s the thing though, it’s not that version of Bats anymore in Batman. While he’s still there in a way (you’ll have to read to find out),, Bruce Wayne is no longer wearing the cowl. Seemingly shellshocked and taking some time out of the cave, Bruce has given way to a privately-funded, city-approved Batman with Jim Gordon in a mech suit.

At first, I liked this change as I figured it wouldn’t be around for very long, but five months on it’s kind of… still there. And that’s why issue #45 this week is a big deal. Gordon seems to be having issues as Batman (who’d a thunk), as he’s face to face with new villain Mr. Bloom and must “reevaluate” whet it means to be Batman as he’s “almost taken out” by this threat. So my point is that this could be the beginning of the Return of Bruce Wayne… again.

We’ll see, as DC’s been behind the change whole-heartedly (depending whether or not you believe the rumors). For his part, Snyder did say that Jim’s run as Batman was never going to last forever and that Bruce would definitely be back at some point, so cross your fingers. Much like Superman over in his books, it’s cool to see things get shaken up, but sooner than later I want my iconic heroes back where they belong.

Quibbles with the storyline aside though, Batman #45 is my pick of the week, though Superman: Lois and Clark is also something that I’d be remiss not mentioning.

The book reunites the couple in the classic DCU way in the wake of Convergence, DC Comics’ massive crossover event that wrapped up in early Summer. Trapped in a universe that’s not theirs, Lois and Clark have to find a way to survive with their son in tow, while at the same time taking out the villains who plagued their Earth before they actually become this bad guys. It’s a really interesting premise, and gives Superman fans the version of the character that they grew up reading, while still keeping the New 52 continuity intact.

So if you’re getting some comics today, don’t miss out on those two, though Batman #45 has the potential to be a more important issue of the pair. As usual, scroll on down to check out my other picks for the pull list this week, and make sure you click here to see the full listing of what’s hitting three racks on this post-NYCC Wednesday.

Jason's been knee deep in videogames since he was but a lad. Cutting his teeth on the pixely glory that was the Atari 2600, he's been hack'n'slashing and shoot'em'uping ever since. Mainly an FPS and action guy, Jason enjoys the occasional well crafted title from every genre.
@jason_tas
Previous Ubisoft intro’s the famous historical figures you’ll encounter in Assassin’s Creed Syndicate
Next Is a Twilight Princess ‘HD” on the way for the Wii U?