Activision’s Skylanders return to the gaming world with the SuperChargers, adding vehicle play to the long running series. But do these new mechanics enhance or hinder the platformer?

Skylanders, as a series, is always looking for something new; a new hook to capture the audience’s attention and hang onto the massive fan base that it’s built up over the series’ four already existing games. As a rule, from the first expansion with Skylanders Giants to last year’s Trap Team, the little guys and gals usually hit their mark square on the head too, offering just enough ‘new’ to make an impact while keeping the core gameplay intact.

Skylanders is also the first in the toys-to-life genre. The game built-out the section of the gaming landscape all by itself, forging new ground and possibilities that had never really been explored before by a video game. Since then, the genre has exploded with four different franchises (at this point) that includes not only Skylanders, but also Disney Infinity, Nintendo’s Amiibo, and newcomer LEGO Dimensions. It all started with Skylanders though, a series that’s continually been kept fresh.

While its history is quite impressive though, this year’s installment is ever-so-slightly a mixed bag. The majority is fantastic and quite fun, don’t get me wrong, so let’s dig in and I’ll tell you what I mean. 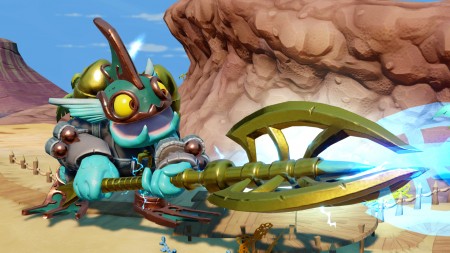 First let’s talk about the figures, because they’re still the biggest hook for Skylanders. Even better than pretty much any wave that’s come before, the SuperChargers figures are really nicely sculpted with great detailing. Some of them carry across the fantastic translucent elements that past figures have had, and the effect looks twice as good on these, even here in the first wave.

Expanding the line this year too, are the vehicles, which work hand in hand with the SuperChargers figures in the game. While the figures don’t fit into the planes, sea-craft, and cars/bikes in the real world, these newest additions to the line have a terrific look to them and impressed me quite a bit.

In particular, it’s the ground vehicles that look the coolest. That might have a little something to do with the fact that they have actual working wheels so you can race around the living room floor if you want. I’m not used to moving parts on Skylanders toys in general, and it’s really cool to see here. Hopefully there’s more like this to come down the line.

So those are some thoughts on the figures and vehicles, as for the game:

Things open up with Kaos up to no good yet again. The series’ main villain has harnessed (sort of) something called the Darkness and has completed the construction of his newest end-of-Skylands device that will help him rule over all of creation – The Sky Eater. It’s basically a giant robotic head that creates a kind of black hole with its mouth, sucking in everything that’s in front of it.

Needless to say, this doesn’t please the Skylanders or their allies any. Those allies, by the way, include everyone that you’d expect; Callie, Buzz, Mags, Sharpfin, and yes – Flynn. Although fans have been showing a little Flynn-tigue in the last few years, the bombastic hero (voiced by Patrick Warburton) is once again leading the charge against Kaos… albeit somewhat haphazardly.

Personally, I kind of like how this series doesn’t ‘forget’ about characters from installments past, and places them back into the narrative of new games as a permanent part of the team. Even so though, and although I’m not sick of Flynn’s antics at all, I do understand that some players would like a new cast once in a while, or a game that focuses on only a certain segment of the side-cast.

It’s important to remember though, that Flynn doesn’t really figure into the gameplay any, and there’s plenty new in that department to talk about. Skylanders tries something new with every installment of course, but the SuperChargers are something all together different than what’s come before. Sure you could swap parts in Swap Force and wield weapons that trapped bad guys that you could then play as in Trap Team, but the SuperChargers add in something that truly alters the series’ landscape with the vehicles.

Characters unto themselves, the SuperChargers vehicles are paired with heroes that match their aesthetic and compliment their basic abilities. You don’t have to use these specific heroes with their vehicles though, as any Skylander can drive any car, aircraft, or sub, though you do get special buffs though if you play a SuperCharger Skylander combo’d with a SuperCharger vehicle. I should mention that I played through a good chunk of the game, as I usually do, with Trigger Happy and I was just fine. As I mentioned above too, these are some wickedly cool toys, with the land vehicles looking the best on the shelf.

And speaking of ‘looking the best’, SuperChargers is the best looking Skylanders game yet. You probably know what to expect from the series by now, but there are some gorgeous and bright cartoony graphics here that evolve the series’ looks a bit even closer towards parity with (what used to be) Saturday morning TV. In fact, that’s probably the best way I can think to put it, saying that it’s like playing a cartoon show, which is pretty great.

There are some awesome little graphical tricks done by developer Vicarious Visions too. Levels where you change size (there’s a surprising amount of that in here) are highlights, offering some radically different visuals for a Skylanders game. And these are really fun levels too, shaking things up nicely. Lets just say that, if you dig kaiju, then you’ll like one of the stages here a lot.

I do have to add though, while we’re discussing graphics, that there are some oddities here and there. Not that it ever affects gameplay any, but at the end of level and level-up screens the graphical ‘stamps’ that show what level you’re jumping too look kind of low-res. I have no idea why this would be and it’s just weird and out of place frankly. A missed thing that was supposed to have been ‘fixed’ prior to release? Probably.

Much like the majority of the graphics however, the sounds are top-notch. The voice cast is excellent as usual, with the return of the aforementioned Warburton, as well as Steve Blum, Michael Yurchak, Star Trek: Deep Space 9’s Rene Auberjonois and about a hundred more talented actors and actresses who voice the now army of Skylanders that exists. And much like the cast, the music is terrific too. Mostly a light and airy affair, the tunes set the stage perfectly and frame the action well without getting overpowering or in the way of what’s on the screen – and that’s exactly what you want from it.

So there’s a lot to like here. A ton in fact, especially if you’re a fan to begin with. But maybe if you are a fan, you might be a little put off by some of the gameplay. Here’s why – it’s as different in places as the SuperChargers vehicles are when compared to the ‘normal’ Skylander figures. I’m not sure if Activision specifically wanted something to change the formula this time around, but the vehicle segments serve to do just that, and that’s both good and not-so-good.

When I play a Skylanders game, I expect a fantastic platformer to be the end experience. That’s still mostly what you’ll be getting from SuperChargers, but you’ll also be stopping to play through a vehicular portion of the game pretty regularly, and that’s where the trouble arises. Or at least, it does till you get in the groove. It’s not that the vehicles are badly done, not at all actually, but they break into the gameplay that you expect to get from a Skylanders game, and that can be a little off-putting at first.

Basically, Skylanders SuperChargers plays exactly like every recent Skylanders game does, jumping and all. It’s a formula that’s been distilled down to something close to perfect, and really needs no alteration at this point, save for a new hook or two. That’s where the vehicles come charging in, and the first time that I was pulled out of a platforming section and dropped into a car, well, I didn’t really know if I liked it so much. It’s different, and sometimes something different -especially when we’re already set in our ways- can be… aggravating. 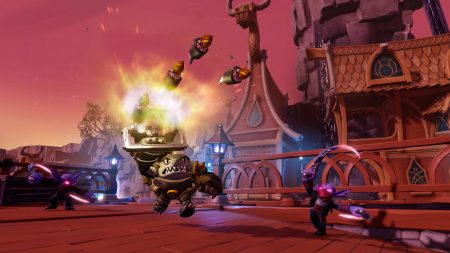 Here’s the thing though, the vehicular portions of the game are just as well done as the platforming ones and, when you get used to the idea of hopping back and forth, I have a feeling that you’ll find ’em as much fun as I did. Yes, that’s right, fun. I’m well aware of the fact that I just spent a few paragraphs complaining about them, but the driving is actually tons of fun once you get use to it, and presents new challenges that you’ll actually find yourself looking forward to in each level.

While some are better than others (the cars being the coolest), and you’re not forced to play through all of them in any level, all of the different vehicle options are fun to drive around in. I’m going to go ahead and say it too – I’d play a Skylanders racing game with the SuperChargers. I would, honestly. If that’s not a telling comment, considering that I love these games for the platforming, I don’t know what is.

There’s a pretty big new element in Skyladners SuperChargers, and some of that newness will probably put you off at first, but in the long run this is yet another feather in the series’ silly hat. Though the break in the action that the vehicle segments provide does serve to throw you off at first, the expertise with which they’re implemented by the team at Vicarious Visions will get you enjoying them sooner than later.

In addition to all that, the graphics and sound are all as good as this franchise gets. SuperChargers oozes quality in pretty much every area save a few odds and ends, and that makes it pretty much a must play for series fans, and a game that anyone with a penchant for cartoony action should check out. You’ll drive, you’ll fly, you’ll deep sea dive, you’ll run and gun at baddies- and you’ll have a great time doing all of it.

This review was completed with a copy of Skylanders SuperChargers supplied to BG by Activision.

Jason's been knee deep in videogames since he was but a lad. Cutting his teeth on the pixely glory that was the Atari 2600, he's been hack'n'slashing and shoot'em'uping ever since. Mainly an FPS and action guy, Jason enjoys the occasional well crafted title from every genre.
@jason_tas
Previous NYCC 2015: Dark Horse announces murder and conspiracy from creator Van Jensen
Next The Legend of Legacy (3DS) Review