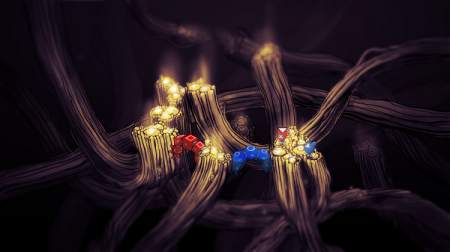 It’s been a while since I played a pure puzzle game that was different to the standard matching and moving games that are ten a penny.  Perlinoid, a game in development by German developer Jumpsuit Entertainment, is full of alien landscapes with what they describe as ‘phantasmagoric caterpillars’ and ‘mushrooms taller than skyscrapers’, and it leads to an interesting puzzle experience.

In Perlinoid, the idea is to get a number of biped creatures of different colours to set points on the map, and the colours are the key to the puzzles.  You move the creatures by clicking on them and clicking where you want to move them.  There are a number of things on the map that are also coloured and react differently depending on the colour of the creature that approaches them.  So, for example, there are caterpillars that form bridges, however only creatures that are the same colour as the caterpillar are able to walk across them.  There are also gates which do not allow creatures of the same colour through.  It’s your job to figure out how to move the creatures around in order to get them all to the designated spots on the level.

The mechanics are easy to pick up, but the challenge is doing things in the right order so that all the areas that you need a creature to be stood on to win the level are covered.  Luckily, if you make a mistake, you don’t have the restart the level, because you can easily go back and retrace your steps and try again.

An interesting feature of the game is that, if you’re colour blind, each different colour object in the game has it’s own unique shape, so all the blue creatures will have one shape and the red ones will have a different shape, making it easy to distinguish them from each other.

Perlinoid looks like it’s shaping up to be an interesting and enjoyable puzzle game and I’m looking forward to playing more of it in the future.

Perlinoid is being developed by Jumpsuit Entertainment and is scheduled for release some time in 2016.

Mike is Brutal Gamer's Indie Editor. He has been playing video games since the early 90s and is fond of racing games, puzzlers and MMOs. Typing /played while in WoW makes him cry, but not enough to stop him playing some more.
@Ognawk
Previous Transformers: Devastation goes behind the scenes with the dev team
Next Toys R Us opens early this Sunday for LEGO Dimensions debut

A spiritual successor to the Dead Space series, PLAION and Skybound Games’ The Callisto Protocol …