Lots to like once again on the racks this Wednesday, including the latest Jeph Loeb and Tim Sale hued epic- Captain America: White. 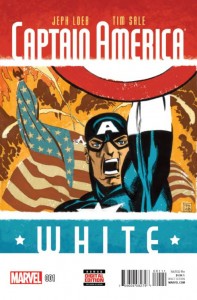 Harken all the way back to WWII with Cap in this new mini-series from the team behind Spider-Man: Blue, Hulk: Gray, and Daredevil: Yellow (not to mention Batman: The Long Halloween). Starring the first man to don the Captain America uniform, Steve Rogers, the book is loaded up with Marvel characters from the last great war like Bucky (you know, back when he was still just ‘Bucky’) and the Howling Commandos (you know, back when they weren’t… monsters).

It should be a good one, and is not to be missed by anyone who still counts themselves as a fan of the original (and still the best) Sentinel of Liberty. Past Captain America: White though, there’s still tons to like this week.

Scroll on down for my full list of picks, and make sure you click over to the Previews page to see the full catalog of what’s available.

Jason's been knee deep in videogames since he was but a lad. Cutting his teeth on the pixely glory that was the Atari 2600, he's been hack'n'slashing and shoot'em'uping ever since. Mainly an FPS and action guy, Jason enjoys the occasional well crafted title from every genre.
@jason_tas
Previous Red Alert 2 is free for PC gamers on Origin right now
Next Turtle Beach announces new Stealth 450 wireless headset