Home / Comics / So, who is the Totally Awesome Hulk anyway?

So, who is the Totally Awesome Hulk anyway?

Marvel has released a quartet of images (so far) of teases at who the ‘Totally Awesome Hulk” might be, and they’re all pretty interesting. 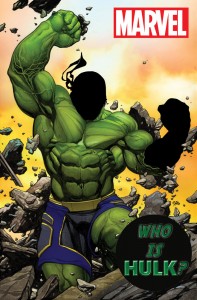 What happens to Bruce Banner in Secret Wars (or just after) is still something of a mystery, but we already know one thing- he’s not the Hulk in the all-new, all-different Marvel Universe. But who is, is an equally big question mark.

To that end, Marvel has unleashed a series of images teasing at the character’s identity, and each one is quite telling. All four are radically different, so I don’t think we’re dealing with some character that just has a lot of looks (though who knows), and that all resemble other Marvel characters.

Pretty clear are Loki and Thor, with The Maestro being a little harder to spot, and I think that last one might be Iron Fist. But are any of them who I think, or who they appear to be? Could there be more than one new Hulk? Maybe a group of them that fancies themselves as already established Marvel heroes? And why is that left hand blocked out in every shot?! What does he have the Infinity Gauntlet on or someth- …nah, couldn’t be.

Or maybe it could. Find out the answers when Totally Awesome Hulk #1 hits the stands this Fall/Holiday. Or before. Maybe. We’ll let you know.

Jason's been knee deep in videogames since he was but a lad. Cutting his teeth on the pixely glory that was the Atari 2600, he's been hack'n'slashing and shoot'em'uping ever since. Mainly an FPS and action guy, Jason enjoys the occasional well crafted title from every genre.
@jason_tas
Previous New Star Wars toys go on sale tonight and Toys R Us celebrated all day
Next Diamond debuts all Star Wars catalog for comic shops