The second issue of Valiant’s massive Book of Death event holds in-fighting aplenty for the Unity team, and a bunch of revelations. 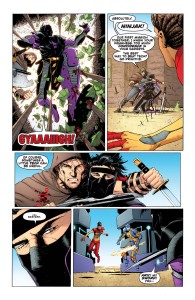 Where we last left off, Unity had come together against Gilad, The Eternal Warrior. Set to protect Tama, the latest Geomancer, Gilad had gone against everyone that he trusted, and that included his own teammates.

With the Earth itself now under the control of a second, corrupted Geomancer that no one even realizes exists yet, only Gilad stands as the voice of reason. Though that voice is so far falling on deaf ears.

Early on in this issue, we see that reason isn’t something that the Unity team or their handlers really care too much about. I don’t think it’s spoiling too much to say that there’s a pretty big fight that starts off the book, and it’s one that Gilad has a serious upper-hand in… as insane as that might sound given who makes up Unity.

But as cool (and crazy) as it is seeing the near total domination that takes place here, the rest of the book is even better. Once the battle is over and the dust settled, Neville Alcott (the main man behind Unity) starts to think that maybe Gilad might be onto something. As we find out, that’s something that not even The Eternal Warrior is 100% sure of.

And while it’s not the most shocking thing in the world when we finally see the force of evil behind events at the conclusion of this issue (we’ve seen plenty of previews after all), it’s nonetheless extremely cool. I won’t spoil it here, but it’s a villain that’s been in the shadows for a while, and not seen up against the heroes of the Valiant U in any real way… well, except one, and he’s nowhere to be found. 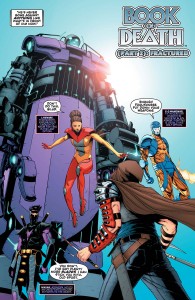 In a superhero comic, if you can say that the big battle is the least interesting part of the story, then I’d count that as a very good thing. Of course, I don’t mean that the fight is boring, but that the rest of this issue is packed with revelation and points that move the narrative forward in a fantastic way. As usual too, it’s the writing talents of R0bert Venditti behind it all.

Venditti has shown a tremendous ability to fit his style to a fantastic range of heroes from all across the comics landscape, but I think it might be in Valiant’s universe that I appreciate his style most. Book of Death nicely illustrates why too, as he makes every hero in the book likable, even when they’re fighting each other. The scripts moves along at a snappy pace too, but never feels rushed, and somehow manages to work in multiple story points that should be major ones for the mini-series. Oh, and the villain has a damned impressive entrance, complete with a fittingly menacing look.

And that’s thanks to artists Robert Gill and Doug Braithwaite, who tag in and out in the story (don’t worry, it makes sense), the book looks pretty spiffy in its entirety. Clarifying a tad, issue #2 of Book of Death has a really cool split personality in the way that it jumps back and forth through time at one point (which results in yet another major revelation). That’s something that we’ve seen in Valiant Comics before and it continues to be used to a great effect.

After being lukewarm on the idea behind Book of Death (I actually had the wrong idea about it), I’m eagerly awaiting every issue and the crossovers, which have turned out great thus far as well. As usual with one of Valiant’s major offerings, this is an extremely well-put together comic, and one that no Valiant fan should skip.

Jason's been knee deep in videogames since he was but a lad. Cutting his teeth on the pixely glory that was the Atari 2600, he's been hack'n'slashing and shoot'em'uping ever since. Mainly an FPS and action guy, Jason enjoys the occasional well crafted title from every genre.
@jason_tas
Previous Marvel’s newest variant covers cosplay it up this Fall
Next New Madden 16 trailer is action-packed and… weird