The latest game in the Legend of Zelda franchise, TriForce Heroes, is in line for a late October release. 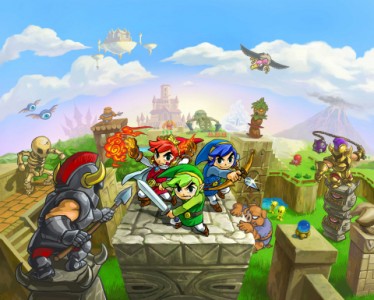 Questing on over to the Nintendo 3DS, The Legend of Zelda: TriForce Heroes casts players in the role(s) of Link once again, as he’s part of the ‘Legendary Trio’ this time around. The other two members of the team? Also Link.

Three different Links, each wearing outfits that give them a different ability, make up the squad, who’re battling the latest evil to befall the world of Hyrule. The outfits that you can don in the game give you the ability to fire off arrows, or boast an extra set of hearts that can prolong your time in combat. Each one gives the Link wearing it a different ‘power’, thus making the heroes a lil’ different from one another.

As you might imagine too, multiplayer is a big part of this one. Three gamers can quest together simultaneously, giving the Legendary Trio an actual trio of players behind them. You can either play over the internet, which requires each player to have a copy of the game, or locally, where you need only have one copy to engage in a little Download Play with the other two 3DS’ present.

Don’t worry about single player either, as you can quest solo as well. You’ll just be ‘renting’ a pair of paper dolls to go along with you, as you need three characters for some of the puzzles here. And no, I don’t really know what ‘paper dolls’ means, but it sounds borderline creepy.

Pretty easily one of the biggest 3DS titles launching in time for the Holidays, TriForce Heroes hits retail and the eShop on October 23rd.

Jason's been knee deep in videogames since he was but a lad. Cutting his teeth on the pixely glory that was the Atari 2600, he's been hack'n'slashing and shoot'em'uping ever since. Mainly an FPS and action guy, Jason enjoys the occasional well crafted title from every genre.
@jason_tas
Previous New Call of Duty: Black Ops 3 screens show off single and MP combat
Next Support the rebellion with this new gameplay trailer for Homefront: The Revolution