A six-part crossover event akin to a superhero arc like Secret Wars, Vader Down launches the first such story for Marvel’s Star Wars brand. 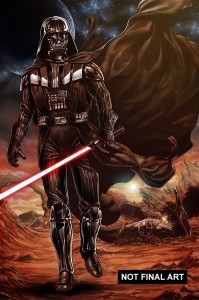 “This is a true crossover in the classic Marvel Style,” says Editor Jordan D. White. “Kicking off in the Vader Down one-shot, the story then bounces between DARTH VADER and STAR WARS, telling a story that is essential to the plotlines of both books, that takes the casts from each and smashes them together in one epic tale!”

Vader’s TIE Fighter has been shot down. Seeing this as their one, best chance to take Vader down once and for all, the Rebellion is ready to throw everything they have at him. Alone, outnumbered, and outgunned, Darth Vader now must face down the entire might of the Rebel Fleet. But the Rebels are about to learn the true unrestrained power of the Dark Side of the Force. With the Rebellion putting it all on the line, could this risky gambit cripple their forces in the fight against the Empire?

“They’ve got Vader in quite a predicament,” says Jason Aaron in an interview with Marvel.com. “He’s grossly outnumbered and his ship has crashed on this alien landscape. Whether everybody believes they can do it or not, they know this is their best shot to capture him or kill him or whatever. When you get that shot, you’ve got to take it and send everyone you’ve got down after him.”

To defeat their greatest enemy, the Rebel Alliance will risk it all. Be there as the Star Wars: Vader Down crossover kicks off in an oversized VADER DOWN #1 one-shot this November  and continues in the pages of STAR WARS and DARTH VADER!

Well it cannot be said in any way, that Marvel isn’t running with the Star Wars brand, after getting it back at the turn of last year into this one. For years it had been at another publisher of course, but now that Marvel has it they’ve got their flagship book running monthly, as well as the monthly Darth Vader comic, and have had Princess Leia just close out a mini-series while Lando is just launching into one.

It’s been a glut of pretty great stuff, with few weak moments, and it’s about to get even better. With Vader Down, Marvel has something that I think might be a first in the comics world. I can’t remember another crossover event with Star Wars in the mix from any other publisher, and that’s exactly what Vader Down is.

Pretty cool, and if you’re a Star Wars fan, it’s probably something that should more than have your attention in this Star Wars-heavy year. If you haven’t been reading, Marvel has a pair of graphic novels coming up that should get you in the groove.

Both Star Wars Vol. 1: Skywalker Strikes and Darth Vader Vol. 1 are coming up shortly and both tell excellent tales from that Galaxy Far, Far Away. As for Vader Down #1 though, look for that in November, just about a month before the new film trilogy kicks off in theaters.

Jason's been knee deep in videogames since he was but a lad. Cutting his teeth on the pixely glory that was the Atari 2600, he's been hack'n'slashing and shoot'em'uping ever since. Mainly an FPS and action guy, Jason enjoys the occasional well crafted title from every genre.
@jason_tas
Previous Godzilla stomps onto the PS4/PS3 this week
Next Store your bat-books with this awesome Batmobile bookend set