Home / Comics / Valiant opens the Book of Death this Summer

Valiant opens the Book of Death this Summer

The deaths of the most legendary characters in the Valiant U have been seen and experienced by only one person, the Geomancer from the far-future, sent back in time by The Eternal Warrior. 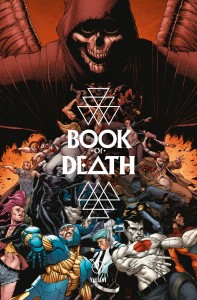 Now we know. The Book of the Geomancer has recorded it all. But only a young girl – the last in a line of the enigmatic mystics who protect the Earth known as Geomancers – has seen this future come to pass, from the coming cataclysm to the dawn of the 41st century. Alone with her sworn protector, the Eternal Warrior – a soldier battle-forged across five thousand years of combat – the duo must defy their allies to stop the Dark Age that now threatens to eclipse our world.

Together, they are the number one target of every hero and villain on Earth. Either the Eternal Warrior hands her over…or they take him down. But can even he single-handedly protect one child when the entire Valiant Universe wages war against him?

Valiant’s next crossover event book sounds as epic as their last one, The Valiant. And speaking of that book, which shed way more light on the mysterious Geomancers and the Immortal Enemy that threatens them all at one point or another, it’s fallout is still apparently being felt. In fact, it’s a driving force behind the Book of Death.

Starting in the first issue of BoD, which hits stores next month, Valiant will apparently throw everything their universe has got at The Eternal Warrior and the current time-traveling Geomancer. The 40 page book will star the talents of writer Robert Gill and artist Doug Braithwaite, with other teams taking on the remaining three issues, and is being touted as nothing less that the “gateway to the next decade of the Valiant Universe”.

That’s a pretty big and bold statement, but knowing Valiant, it’s not hyperbole. The publisher isn’t afraid at all to shake things up in it’s corner of the comic book multiverse, and that usually means that even main characters aren’t untouchable. Just look at the Renegades and Bloodshot if you need proof of that.

And with the Book of the Geomancer, which is actually what ‘The Book of Death’ refers to, we’re going to have the fates of all the major players in Valiant’s books spelled out- hence why everyone and their mother is after it. This should be quite a ride.

The first issue of the Book of Death lands in July with Book Of Death: The Fall Of Bloodshot #1, which is again written by Jeff Lemire with art by Doug Braithwaite. The second issue, Book Of Death: The Fall Of Ninjak #1, hits in August with Matt Kindt and Trevor Hairsine as the creative team. With Joshua Dysart and Kano taking The Fall of Harbinger in #3, Robert Venditti and Clayton Henry will round the story out with The Fall of X-O Manowar in issue 4.

Jason's been knee deep in videogames since he was but a lad. Cutting his teeth on the pixely glory that was the Atari 2600, he's been hack'n'slashing and shoot'em'uping ever since. Mainly an FPS and action guy, Jason enjoys the occasional well crafted title from every genre.
@jason_tas
Previous Rainbow 6 Siege officially knocking down doors on console and PC this Fall
Next COSPLAY WITH KINDNESS: AN INTERVIEW WITH KAYLEIGH GRUBB