The big two’s big crossover events are spinning up, with Convergence heading into the last few issues and Secret Wars starting to really get into it. That’s not all this week though, as there’s plenty of non-superhero stuff to be had. 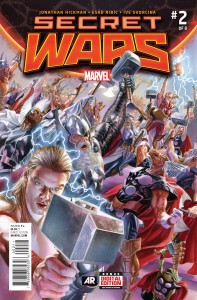 Let’s start with the big ones though, because there are a ton of them. Convergence #6 (of 8) lands this week along with a plethora of crossover titles. The even on the whole hasn’t been the greatest, but it’s not all bad either, and I’m actually getting really attached to the Earth-2 heroes, who I didn’t care a bit about prior to this series. Plus some of the alternate-dimensional characters are just plain fun to see again, with more than a few hailing from pre-Crisis and pre-Flashpoint universes.

While DC Comics’ Convergence is winding down though, Marvel’s so far excellent Secret Wars is just heating up. The second issue of the book lands this week, takes the focus and settles it squarely on Thor… s. Featured on the cover are a myriad of alternate Thors from across Marvel’s version of the multiverse. It’s a freaking cool cover too.

And while there are no ‘real’ crossovers as of yet for Secret Wars, there are plenty of related books with the Last Days titles. Those encompass several titles like All-New Captain America and Magneto, both worth a read if you’re starving for Secret Wars action.

Past that, there’s a bunch of great stuff unrelated to either of those mega-events like Valiant Comics’ X-O Manowar and Imperium, Dark Horse’s Harrow County and Abe Sapien, and more. Read on for my full picks, or click here to see the complete listing for the week right on Previews Magazine’s page.

Jason's been knee deep in videogames since he was but a lad. Cutting his teeth on the pixely glory that was the Atari 2600, he's been hack'n'slashing and shoot'em'uping ever since. Mainly an FPS and action guy, Jason enjoys the occasional well crafted title from every genre.
@jason_tas
Previous The Division slips to 2016, as Ubi leaves the last-gen behind
Next Grandia 2 remaster on the way for the PC