As promised for the second week of Horror in May, here is my review of The Evil Dead II! 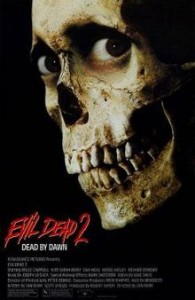 Where the original Evil Dead was created to be a dramatic tale of horror, it ended up being… well, as I pointed out last week, far cornier than intended. In the case of the Evil Dead II, instead of trying to make it dramatic, they took it quite the opposite direction, and made it a horror themed romp through comedy.

Another change, or perhaps the lack thereof, is that the second movie is actually a remake of the first. I didn’t understand that the first time I watched it and had to have someone explain it to me, but now I’m surprised to find out that a decent number of people were on the same “Ash, why on earth would you go back??” train with me.

The second part of the series begins with kind of a fast forward through Ash’s (played once again by Bruce Campbell) first terrifying night in the cabin. After surviving the night of horror, he attempts to drive away assuming that with daylight would come freedom, however he is sadly mistaken. As he arrives at the bridge he and Linda (his girlfriend) crossed to reach the cabin, he is met with no bridge, but instead a chasm going straight down. Terrified and in a state of disbelief and shock, he returns once more to the cabin.

Eventually the daughter of the cabin’s owners, Annie, and her research partner/boyfriend, as well as a couple of other people, cross the bridge and arrive at the house (which Ash and Linda basically snuck into uninvited, assuming the cabin was empty). There they find Ash… as well as most of the cabin covered in blood. It turns out that Annie’s father was a researcher and was studying the Necronomicon.

Unfortunately, her parents were also the first to be corrupted by the evil book and, well, one of them is also still in the basement. Not that anyone knows that immediately, as the two guys knock out Ash and throw him in the cellar, thinking he must have killed Annie’s parents. When he awakes, they ignore his pleas for help until ol’ granny monster is in reaching distance. From there the night goes hilariously downward.

The acting this time around is less cheesy, and more comedic. Where before it seemed like it was accidentally bad, and this time it feels intentional, and that lightens any criticism against it. Obviously, the score is freakin’ fantastic too. As with the first movie, they recruited the help of one Joseph LoDuca, who’s work you probably know from a bunch of series’ and films, and is an incredibly talented individual by ways of music. On an unrelated note, he also composed the music for the Spartacus series.

I’m going to put down right now on record that The Evil Dead II is one of my favorite movies of all time, and my favorite movie of the original trilogy; at the moment I can’t really say my opinion of the 2013 remake because I haven’t yet seen it, I’m saving it for the end of the month.

In my opinion I enjoy this one most because it’s grounded in horror more than Army of Darkness, but takes itself lighter than the original. EDII is a respectable comedy, or horror film, whichever way you look at it, and you’d be doing yourself wrong if you gave it a miss.

Five parts actual review, 2 parts sarcasm, 2 parts bad puns, and one part self loathing = one of my game reviews.
Previous Tony Hawk 5 grinds out some details, offers online multiplayer
Next Warhammer 40k takes to the stars in Battlefleet Gothic: Armada