200cc’s!! That Nintendo Download is a speed demon this week

The fastest eShop update of the year is here, and it brought MewTwo and Mario Kart DS along with it. 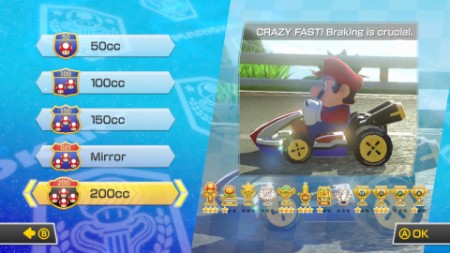 Not a huge update this week for the eShop, but what there is should make those who feel the need for speed happy. Yes, 200cc mode is finally here for Mario Kart 8, so if you like your kart racing so fast that you almost can’t control it, you’ll be a happy camper.

Mario Kart DS also makes an appearance in the new DS section of the Virtual Console, and is a pretty great entry in the series if you missed it the first time around. Not to be outdone, Super Smash Bros adds the Pokemon MewTwo this week as well. He’s also free if you both bought and registered both the 3DS and Wii U versions of the game before Club Nintendo closed up shop last month.

Anyway, those are the highlights, here’s what’s available in full:

Jason's been knee deep in videogames since he was but a lad. Cutting his teeth on the pixely glory that was the Atari 2600, he's been hack'n'slashing and shoot'em'uping ever since. Mainly an FPS and action guy, Jason enjoys the occasional well crafted title from every genre.
@jason_tas
Previous So what’s on tap for that new King’s Quest game?
Next Mod Creators Can Now Charge For Their Mods on Steam