Is Ray going crazy, or are things not what they seem in Bloodshot Reborn #2? 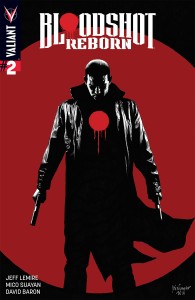 Ray Garrison, once known as the unstoppable killing machine called Bloodshot, must track down the impostors carrying out mass shootings in his former name. But the hunter becomes the hunted when an upstart FBI investigator and her grizzled partner believe the original Bloodshot himself to be responsible for the murders. Can Bloodshot elude the agents – and his own inner demons – long enough to take out a nanite-infused gunman?

Yeah… things aren’t really great for Ray at this point. Not only is he sans-nanites (which he’s actually pretty happy about), but he’s seeing things. Like, major things. Like, the dead Geomancer named Kay that he may have been falling for. Oh, and the little cartoon character that calls itself Bloodsquirt. Him too.

It’d be easy to say that Ray was indeed losing his mind, except for the face that Kay was in touch with the energies of the  Earth itself, and he was an unstoppable killing machine not all that long ago. Where this one is heading, I don’t know, but I’m loving the ride so far (check out our review of Bloodshot reborn #1 for why).

Bloodshot Reborn #2 hits the stands on May 20th, from the team of Jeff Lemire and Mico Suayan.

Jason's been knee deep in videogames since he was but a lad. Cutting his teeth on the pixely glory that was the Atari 2600, he's been hack'n'slashing and shoot'em'uping ever since. Mainly an FPS and action guy, Jason enjoys the occasional well crafted title from every genre.
@jason_tas
Previous Charles Dance talks Witcher 3 in new behind the scenes video
Next PS4 Beta Test of Elder Scrolls Online Starting Tomorrow