Diamond lists a bunch of new items, including Batman, Predator, Ant-Man and more

Plenty to like from Diamond Select Toys coming up in the next few months, and all of which has just been listed in Previews magazine. 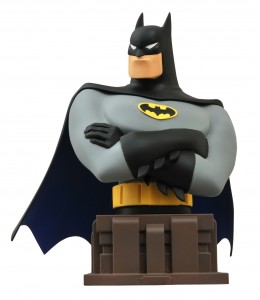 Ever the bible of the comic book and toy collecting fan, Previews always has the coolest stuff listed in its pages. The latest offering set from DST is proof of that, as there’s something for pretty much every area of fandom. Some of the stuff was seen at Toy Fair, though I can’t say I remember seeing those Nightmare Before Christmas mini-figure set, or that Hulk gelatin mold (that thing’s too funny- think of the possibilities!).

Lots to like, so take a scroll down the page, make your picks for what you’ve gotta have, and then hit those links to log your pre-orders. Most of this stuff should be hitting fairly soon too, so if there’s something you’re really extra-into, you shouldn’t have too long till you get in your hands.

Personal picks- the Hulk mold notwithstanding, I like the Batman and Predator bust/banks and that Ghostbusters pizza cutter. Come on, a Slimer pizza cutter? That’s kind of a must have if you’re a fan of one of the greatest movies of all time.

Jason's been knee deep in videogames since he was but a lad. Cutting his teeth on the pixely glory that was the Atari 2600, he's been hack'n'slashing and shoot'em'uping ever since. Mainly an FPS and action guy, Jason enjoys the occasional well crafted title from every genre.
@jason_tas
Previous Check out 20 mins of new Age of Wonders III expansion gameplay
Next Quantum Break breaks for 2016, as the game is the latest delay into next year