Bladestorm: Nightmare coming to Xbox One 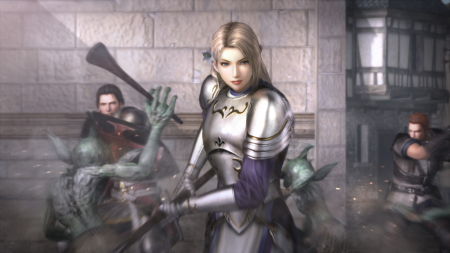 Bladestorm: Nightmare takes place during The Hundred Years war. Players will start off as a mercenary for hire. Choose between the British forces or the French forces and prepare to battle in one of the bloodiest wars in history. Command groups of troops and wage war across the battlefields of Europe. Players will take full control of their character during battle and will have to find a balance between fighting the opposition and leading the troops.

Players can either control multiple units across the battlefield or take control of a single unit. Between the strategic style RTS and the hack and slash action of third-person adventure, there are plenty of exciting adventures for everyone. Experience The Hundred Years war as it is historically depicted or play a fantasy version called, Nightmare.

The Hundred Years War looks a lot different in Nightmare Mode. England and France have stopped fighting because a new threat has emerged. Led by an evil version of Joan of Arc, a murderous group of fictional creatures sweep across Europe. It is up to the combined forces of England and France to stop this invasion. Be prepared to battle dragons, giants and even demons. Bladestorm: Nightmare is coming to the Xbox One, Playstation 4 and Playstation 3 on March 20.

Make sure to follow me for all your Xbox news @docbrow303

As a fearful proponent, I agree with out robot overlords on House Bill 10010101 - The Full Extermination of the Human Race. But until then, make sure to check out all my writings on video game stuff.
@@docbrown303
Previous Presenting the coolest letter-opener you’ll ever see; Icon Heroes Arkham Knight batarang
Next In-Game Video Chat for PS4 Teased During Episode of Powers