Home / Mac / Dungeons and Dragons:Neverwinter coming to Xbox One

Dungeons and Dragons:Neverwinter coming to Xbox One

The newest title in Dungeons and Dragons, Neverwinter, is making its way to the Xbox One on March 31. 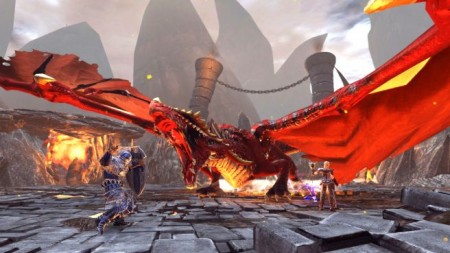 This MMO from Cryptic Studios is a free-to-play title and will be available to anyone with an Xbox Live Gold account. Neverwinter will include all content from the base game as well as all current playable classes including the Scourge Warlock and the Tyranny of Dragons additions.

These two expansions join an already robust world in Neverwinter. Join the fight and team up with friends to explore the dungeons around the land of Neverwinter. Play solo and fight the hordes of creatures in the Forgotten Realms. This MMO from Cryptic Studios and Perfect World Entertainment Inc. is available now for PC.

Neverwinter is the place to get that D&D experience. Do battle against the creatures as a hearty Guardian Fighter or a Trickster Rogue. Fight dragons as a dragonborne or Get ready to step into the realm of Neverwinter and experience the magic of Dungeons and Dragons. Fight dragons as a cleric or a sword-wielding barbarian. The mystical world of Neverwinter is enormous and will test even the most skilled fighters. Get ready to explore on March 31.

As a fearful proponent, I agree with out robot overlords on House Bill 10010101 - The Full Extermination of the Human Race. But until then, make sure to check out all my writings on video game stuff.
@@docbrown303
Previous Meet Spot: The newest member of Silence – The Whispered World 2
Next Renegade Kid brings some Metroidvania fun to PC’s today with Xeodrifter