Oh my was there an awesome lot of toys in the DC Direct booth at this year’s Toy Fair. The company’s Batman animated series is exploding with new offerings (and a Batmobile!) and their new 6″ line will make you beam if you were a fan of Mattel’s defunct DCUC series. 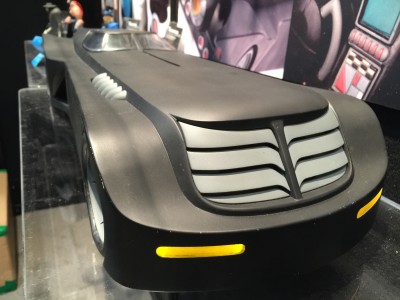 If I was to pick an overall winner at Toy Fair this year, at least from what was shown on the show floor, I’d have to go with DC Entertainment. There was so much to like, especially if you’re a DC fan (which I am), it’s actually tough to set through it all since it’s almost all awesome stuff across the boards.

We’ll start with the above pictured though, because the Animated-inspired Batman line is just all kinds of awesome. The biggest new addition to the relatively new series (literally) is the Batmobile from the first run of the classic TV series. The car is massive, in scale with the action figures and actually fits Batman and Robin side-by-side in the cabin (you just pre-ordered didn’t you?). As if that’s not enough of an upgrade over any other Batmobile that’s been released till now, it also lights-up in both the tail and headlights (no, that’s not a trick of the light in the pic) as well as the cockpit. It’s beyond cool, and sort of a must purchase if you love Batman: The Animated Series. Oh, and the price isn’t bad either at just $99.99 USD. One more thing- if it sells well, there may be more large-scale vehicles to come, and I’ll just let you think about what that might mean…

Next up, lets take a look at the all-new DC Icons figure series. Remember that awesome DC Universe Classics line from Mattel? The one that everybody loved but also complained about non-stop? Yeah that one. Miss it, or having something like it? Yes? Then this is the series for you.

Icons includes some of the most iconic (hence the name) incarnations of the best of the best in terms of DC’s catalog of heroes and villains. Spread out across the entirety of the history of the brand, meaning you’ll get New 52 and classic continuity figures, Icons sports some incredible designs and some beautiful toys. Really, there are few figure lines that have starred these characters that look this good, and some of the sculpts are not even final (including Superman and Aquaman). Articulation and paint apps look solid as well, even at this point, and there’s even a deluxe figure with Green Lantern and his incredible translucent construct-armor, so there’s probably more to come there too.

A company representative even told me that there are more accessories that may or may not be in the cards for down the line if the first few series’ sell well. Just as an example, there’s a ridable seahorse for Aquaman that could see retail, as well as variants that may appear. On the topic of accessories that already exist though; the above that you see with Superman is standard for these guys. They’re stocked pretty well with alt heads, ‘accessories’ like Kelex (Supes’ robot pal), and the like. The Atom figure is actually a three pack with all three of the characters who’ve born the uniform of the shrinking-hero, and there are more packs for Atom that might see release that include the same characters, but in different ways, so we might get a 6″ scale Ray Palmer and a miniature Atomica. Yeah they’re doing all kinds of amazing stuff with Icons. 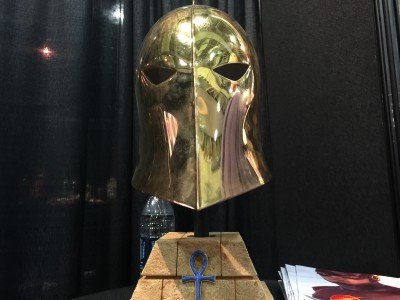 Past those there was also a set of super-cool statues (love that Firestorm and Captain Mar… Shazam), plush (Dex-Starr!), TV and video game single figures and box sets that’ll see the arrival of more Batman: Arkham goodies, as well as Flash and Arrow toys. Then there are the props.

The Motherbox replica is on track for release soon, as is the Reverse Flash ring (which holds a spoiler for the TV Flash show), and the Tarot deck. And finally, after a decade on the shelf in figurative mothballs, Dr. Fate’s helmet is finally coming. There’s no release date as of yet, but it’s definitely on the way, and it’s all because of Constantine.

As if you needed another reason to #saveConstantine on NBC, because the show featured Fate’s helm in several episodes, DC has once again chosen to move forward with this incredible piece. It’s not meant to be wearable, but who cares, this is the helm of Fate here and it needs to see release- and it finally will. Man, I can’t wait for this one.

Anyway, lots and lots to like as I said. There are a million and one pictures in the gallery below (actually, 98 in total), so scroll down and get to clicking. Enjoy and start saving that cash as most of this is heading to your local comics shop and online storefronts this calendar year.

Jason's been knee deep in videogames since he was but a lad. Cutting his teeth on the pixely glory that was the Atari 2600, he's been hack'n'slashing and shoot'em'uping ever since. Mainly an FPS and action guy, Jason enjoys the occasional well crafted title from every genre.
@jason_tas
Previous Epix plans for a big March with robots, undead killers, and… Katy Perry
Next Frankenstein Underground #1 (Comics) Review