March is Women’s History Month, and Marvel Comics is celebrating the women of Marvel with a set of covers featuring artwork by the some of the hottest female pencilers in the biz. 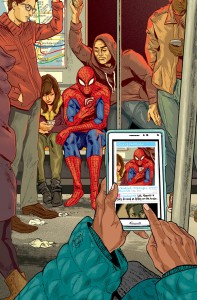 Not necessarily featuring female heroes and villains, the covers of March for the books listed below will feature the art by the Women of Marvel. You’ll be able to find covers by artists like Faith Erin Hicks, Ming Doyle, and Colleen Doran, as well a a bunch more, including some yet to be named.

Women’s History Month notwithstanding, doing something like this just makes sense as there’s a growing female demographic that has taken to comics in a big way, and there’s more female-led comics on the stands than ever before as well.

“2014 was a huge year for Women of Marvel, both in our comics and behind the scenes,” says Marvel Editor-in-Chief Axel Alonso. “Marvel now has more titles starring female leads than ever before, the Women of Marvel panel is one of the most highly attended at conventions, and the weekly Women of Marvel podcast continues to grow.  In 2015, we intend to continue that tradition, and March’s Women of Marvel variant covers — featuring 20 of the best female artists in the industry – is just the beginning.”

Here are the books that’ll be taking part int he event:

“Jeanine Schaefer and I have had the pleasure of collaborating with some of the best female artists in the industry to show-off their take on Marvel’s biggest characters and teams,” says Marvel Editor Emily Shaw. “It’s been an incredible experience to bring so many awesome women together for this project. And the results have been pretty awesome!”

I think I need that Spidey cover. That’s too cool. As for Amazing, and the rest of the books above, they’ll all be on the racks this March. Happy hunting.

Jason's been knee deep in videogames since he was but a lad. Cutting his teeth on the pixely glory that was the Atari 2600, he's been hack'n'slashing and shoot'em'uping ever since. Mainly an FPS and action guy, Jason enjoys the occasional well crafted title from every genre.
@jason_tas
Previous Is Smash Bros’ creator done making games?
Next Gigantor set to storm toy shelves thanks to Mezco Toyz