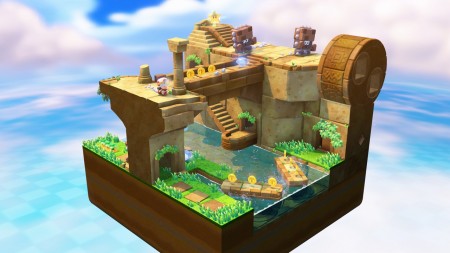 As first-party Nintendo releases go, Captain Toad is kind of a strange one. Originally, I was under the impression that this game was a downloadable title, since it started life as a mini-game within 2013’s awesome Super Mario 3D World and all.

I was a little taken aback when I realized it wasn’t, and the good Cap’n was making his way into a retail box for a full-fledged retail release. That’s not to say that the concept is a bad one at all, because it isn’t, but I wasn’t so sure that what was essentially a tacked-on game mode could support a full game. Could it keep my attention for hours on end? Well, the answer is yes… and no. And I’ll explain that.

Captain Toad: Treasure Tracker is a puzzle game first and foremost. Sure it has some limited platforming elements, but the real star of the show here are the puzzles and solving your way from one end of the game’s levels to the other. If they weren’t, well, it’d be kind of a middling Super Mario spinoff, and it’s not that.

Levels in Captain Toad are small and well-built affairs, packed with content and stuff to do, for their size. At the very least, each stage might take you a few minutes to beat, even with collecting all the goodies scattered around. At the most, and you’ll find this later on in the title, you might be left scratching your head for a while and playing through physically bigger stages that can take a decent amount of time.

Thankfully, the play control is excellent here and should feel right at home to anyone who’s played a Super Mario title in the past… with one big difference. Toad can’t jump. Again, if he could and there was a heavier emphasis on platforming, this would be way too close to a Mario title for comfort. As it is, not being able to leap into the air and smoosh enemies adds a ton to the puzzles here, and makes Toad all that more different than the Italian plumber you’re used to controlling.

So how do you defeat enemies if you can’t jump? Radishes. Much like in Super Mario 3D World (and Super Mario Bros 2 before it) radishes are scattered about the landscape and can be plucked and heaved at ShyGuys and Goombas and all the other assorted minions of evil that stand in your way. Most of the time, you’ll just avoid combat all together, but it’s nice to have the option to put some of these baddies on ice if you want to (and at times you’ll have to). The radishes actually also work into Captain Toad in a cool FPS mode where you ride in a mine cart and pick guys off from a distance too. A fun mine cart level? Yep, this ain’t Donkey Kong Country.

Graphically though, it’s right on par with that other Nintendo series. Captain Toad is surprisingly nice to look at, with varied locations from around Mario’s various games and plenty of visual effects and enemy types. I was expecting a few ShyGuys, but there are loads of baddies from the main series including those Goombas, as well as Bullet Bills, Beetles, and those nasty mole-guys who chuck stuff at you (I have no idea what their name is).

The sound is likewise delightful with music that’s right in line with Super Mario’s past. The tunes are bouncy and fun and keep you playing with high-spirits through tough spots and otherwise frustrating moments, which there aren’t a ton of. I have to add though that I find the Toad voice grating to the extreme and really can’t stand it. Obviously, this is a pet peeve, but it’s there and I felt the need to mention it since I can’t stand it.

Not at all grating is Toadette’s voice though. Yep, Toadette’s in the game as a damsel in distress, but also as a playable character as there’s a second quest (and then some) that stars her and features plenty of chances to play as Toad’s female counterpart. There’s really no difference between the two, but it’s fun to play as a different character nonetheless.

There’s also a bonus chapter here that you can play through if there’s save data from Super Mario 3D World present on your Wii U. This extra chapter opens up the world from that game for play here, with some minor alterations that make the levels playable for a character who can’t jump. It’s a pretty neat addition that actually held my interest for a while, which was a good thing as it shook up the Captain Toad formula a bit.

And that’s probably my main knock on the game- it’s formula. To me, these levels were perfect as a mini-game. They’re short, fun in small doses, and nice distractions from the usual Super Mario gameplay. Thing is though, that ‘usual’ gameplay is tons of fun and has been ensnaring gamer’s attention for years and years. When it’s not there as a main course to Captain Toad’s side-dish, it’s very apparent that this isn’t the best as a meat and potatoes standalone game.

It’s not un-fun, that’s not it, and there’s plenty of charm here. It’s just that, as you play through (and I won’t spoil anything here), you’ll hit a point where you just get tired of it. It kind of overstays its welcome is what I’m saying. I don’t want to be too hard on Captain Toad as I did have fun with it, but I think I would have been happier if it was a shorter playthrough, instead of what we got since what’s there just doesn’t support the length of the campaign(s).

I enjoyed Captain Toad: Treasure Tracker quite a bit, and probably more than I thought I would. The presentation is top notch too and well-fitting with what you’d expect from Nintendo with great graphics, sound, and play control. Heck, it even incorporates the touch-screen on the GamePad and lets you stun enemies with a tap and manipulate some in-game items.

If anything though, I think Nintendo might have been a bit too ‘big thinking’ with the game as its puzzle/platforming gameplay gets a little too long in the tooth with a main quest that just isn’t interesting enough to last as long as it does. It’s plenty fun for a while, but after that the shine comes off and, well, I think the Captain might want to shut down and re-tool before he heads out for another adventure.

And maybe gargle a bit. Might help with that voice.

Jason's been knee deep in videogames since he was but a lad. Cutting his teeth on the pixely glory that was the Atari 2600, he's been hack'n'slashing and shoot'em'uping ever since. Mainly an FPS and action guy, Jason enjoys the occasional well crafted title from every genre.
@jason_tas
Previous Nintendo has sold a whole bunch of Amiibo
Next Double dose of Saints Row hitting consoles this week