The Duke comes to Sony’s portable (and the PS3 via cross buy) in a direct translation of the Megaton Edition. 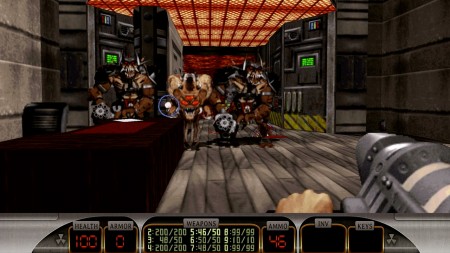 If you haven’t played Duke Nukem and you’re an FPS fan, well, you need to play it. This game is one of the pillars of the genre and really pushed things in an era when most FPS’ were just trying to keep up with Doom and mimic the style and substance of iD Software’s landmark game.

What 3D Realms and Apogee really did with Duke was two-fold. For starters, they infused some much needed personality into the first-person shooter. I remember very well innumerable ‘clones’ (as they were called at the time) of Doom and they all basically tried to put new coats of paint on that game, with little in the way of story, or voice-work, or anything else. Duke changed that with a main character that had a definite way of looking at the world. Of course, Duke 3D was the third title in the series, so developer Apogee had something to work with already, but it was refreshing nonetheless.

Apogee also added a ton of innovation. Duke had full movement possibilities and could do more than just look back and forth- he could also tilt up and down to mow down bad guys, and had an impressive arsenal to do it with. There were also a bunch of interactive elements to the game, which made playing through levels more than just finding keycards and opening doors. 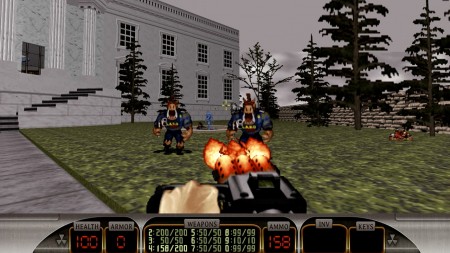 The Megaton Edition of Duke Nukem 3D, that just saw release as a cross-buy game on the PSN, has a few differences with the original. For starters, there are a lot more levels.

Included with this version of the game (which is also available on the PC), are the there expansion packs for the original Atomic Edition. Which means you get the four episodes from that game, plus the tropical-themed Duke Caribbean: Life’s a Beach, the frosty Duke: Nuclear Winter, and Duke it out in DC, which takes the character to Washington to battle aliens.

The packs aren’t really all that great, but if you like Duke and enjoy the game, then you’ll get a kick out of them. Basically, they’re new coats of paint that pro dive for a few more stages to play through, you won’t find them as major as some expansions that are released today- this isn’t BioShock here.

As for the game itself, it makes the jump to the Vita with all the bells and whistles that you’d expect, including somewhat polished up graphics, online multiplayer, and PSN Trophy support (you get one for tipping the, uh, gals). You can also select the expansion packs, or any of the original episodes, right from the main menu, so you don’t have to beat the original game to play the extra content. This was particularly cool for me, since I had played the main campaign to death, but never dove into the additions.

The graphics, while slightly cleaned up form the original release, aren’t anything to write home about in today’s terms. Although they’re not anything special anymore, they did age decently, are still enjoyable and still make the world of Duke 3D a fun one to play through. Likewise the audio is solid, with good rocking tunes and the excellent voice work intact. 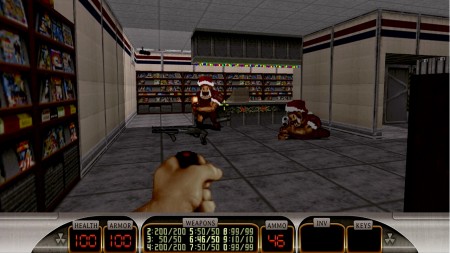 Though pretty much everything comes down on the plus side, there is one issue I had with the game and that’d be the controls. The Vita translates the scheme perfectly to it’s array of buttons and sticks, but it just feels… off.

I can’t quite put my finger on it either, but the controls feel a little too jittery and not as accurate as I’ve played with previously on versions of Duke- and no where hear as good as playing with a mouse and keyboard. The dual sticks work well enough and it’s not like the game’s unplayable at all, it’s just a little too touchy and too easy to miss your target when you’re being swarmed by four or five baddies. Again, it doesn’t ruin the experience, but it seems like a little more attention to fine tuning the sticks would have been a good idea.

If you’re looking for a fun FPS to play on the Vita, Duke Nukem 3D: Megaton Edition should hit the spot nicely. It’s a classic of the genre and a game that really doesn’t get old really. Even now, years after its release in the 90s, I can play it for a while without getting bored. A testament to good design really.

It’s also one of the only FPS’ on the console to be worth a playthrough. The Vita has a dearth of good first-person titles and, when they do come out for it, they tend to be letdowns. Duke manages to not be that in any event, and is plenty fun for playing on the road, or presumably at home on your PS3, since this is a cross buy title.

Jason's been knee deep in videogames since he was but a lad. Cutting his teeth on the pixely glory that was the Atari 2600, he's been hack'n'slashing and shoot'em'uping ever since. Mainly an FPS and action guy, Jason enjoys the occasional well crafted title from every genre.
@jason_tas
Previous Disney’s Big Hero 6 comes home next month
Next HUB IT Sync & Charge Station (Hardware) Review