Home / News / past / Destiny DLC – The Dark Below (Xbox One) Review

Destiny DLC – The Dark Below (Xbox One) Review

The Dark Below is the newest expansion for Bungie and Activision’s  FPS/MMO Destiny. 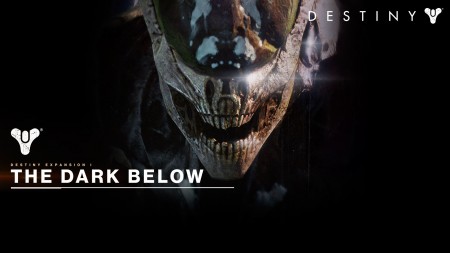 In this expansion, Guardians will face a new threat to Earth in Crota. A member of the alien Hive, Crota is a god who is hell bent on destroying Earth. Guardians will learn all about the failed first attempt at defeating Crota through a few new story missions, one new strike, and finally, a new raid. To tell this story a new character has also been introduced, Eris Morn.

Some time ago, six Guardians went down into the Hellmouth on the moon. Only one of those Guardians survived. Her name is Eris Morn and she finally found a way to escape. Now Eris brings her knowledge of Crota to the tower so she can help guide new Guardians in order to finally close the book on Crota, and it’s here that the new story missions introduce a new way to progress through the Destiny’s campaign.

The new expansion has done some things different with these new story missions. Guardians are tasked with hunting down some creatures and items before the missions will unlock. It is a bit of added variety in the mission structure and, though this might seem like a small difference, in the overall scheme of Destiny, it is a very big difference indeed. Eris also enlists Xur to provide a bounty available to everyone, and along with the new gear available, the level cap has also been raised. Now Guardians can earn light gear that will take them from level 30 to level 32.

The new level cap has arrived with a mix of cheers and jeers. Before The Dark Below, Guardians had to play the raid on Hard Mode to have a chance of raid gear and that would level up Gaurdians to the previous level cap. Now uncommon and legendary gear has been upgraded to reflect the new level caps and weapons have also been upgraded to reach beyond the 300 damage cap. All the previous work that was used to upgrade to level 30 now needs to be done again. The exotic weapons and gear has also undergone an change in the upgrade progress.

During Xur’s visits to the Tower, he will bring with him several exotics that can be upgraded for a price. Players will have to bring the same weapon or gear and then purchase a new exotic shard.

These shards cost seven strange coins and the final step is to spend 7,000 glimmer for an upgraded exotic. All the upgrades earned on the old exotics will be gone and players will have to spend time earning experience to upgrade the new exotics, though now exotics will no longer require ascendant energies to upgrade. Aside from the usual backlash produced during such a change, Bungie has continued to create some really amazing backdrops.

Being able to travel through the Hellmouth is an awesome experience. The new missions are a continued expansion of the beautiful backdrop Bungie has created in Destiny. The lower layers of the Hellmouth look like a H.R. Giger painting too, which is awesome if you’re an Alien fan.

There is a vast network of tunnels but that is not all that is down there. Descending greater into the Hellmouth really creates a new depth of character for the group known as The Hive. Though the Hellmouth wasn’t the only new area to explore as The Crucible also received three new levels.

These new maps in the Crucible will continue to pit Guardians against each other. Visit the Black Garden on Mars in the map Patheon. Get ready for vehicle battles with the map Skyshock set in the Cosmodrome on Earth. The last map, The Cauldron, will take Guardians back to the Moon and inside The Hive’s base. The new expansion costs $19.99 and is available right now.

I for one welcome all the new gear and a new reasons to grind in Destiny.

I have been a rather active player in Destiny, and while I agree there have been some missteps, I believe overall Bungie has a great plan for the game. Their execution of this plan can be questionable at times but I think Bungie and Activision are doing a great job so far.

Destiny has turned into a niche game though. No one at Bungie will ever call the game a MMO but let’s all face reality and call the game what it is, a FPS MMO. So just like WoW or other MMOs, there is a niche crowd forming that continue to pour hours back into the game.

As a fearful proponent, I agree with out robot overlords on House Bill 10010101 - The Full Extermination of the Human Race. But until then, make sure to check out all my writings on video game stuff.
@@docbrown303
Previous New trailer opens up about the races of Etherium
Next The Order 1886’s (Not So) Silent Night Trailer